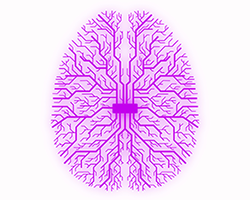 We’re halfway through dinner when the implant malfunctions.

The dining room smells like roast chicken, garlic mash, and mushroom gravy as our father, drunk off one beer thanks to the cocktail of medications he’s on, tells us about the time he stabbed his brother with a fork over a potato.

“God, I miss Frank.” He wipes his eyes, and it doesn’t matter that we’ve heard the same sentimental tale a thousand times. “Your grandmother worked so hard, and there was never enough food in the early years after the oil crash. But we stuck together.”

That’s when my sister, Marie, takes a swallow from her third glass of wine and the colour drains from her face. “Mom?”

We all look. Mom’s expression is frozen, her breathing quick, her pupils dilated.

“Look at her hands,” Marie says. “How can this be happening? It’s been years!”

“Mom,” I say tentatively, “are you okay?” But we all recognize the typing motions of her left hand, the way her right curls around a non-existent control stick. We’ve all heard the story.

My brother, Sean, jumps to his feet and goes to her. “Mom, it’s okay. We’re right here.” Then he looks at our sister. “Call 911. It must be the implant. Something’s wrong.”

Our father protests, “Don’t make a fuss. Give it a second. She’ll be fine.”

And my sister, slurring her words a bit, says, “Certainly better off than the kids she bombed.”

Sean glares at Marie. “Can’t you swallow your pacifist crap for five minutes?”

Then she’s dialling 911. Dad is yelling now, telling Marie to hang up. “Just let your mother be. She’s a damn hero, and she just needs time.”

He’s trying to stand, forgetting he needs his cane, that the left side of his body doesn’t work the way it used to. I put a hand on his shoulder. “Dad, take it easy. Try to relax.”

“Listen to me,” he grumbles. “Your mother doesn’t want more doctors!”

“What do you mean ‘more doctors’?” I ask, and that’s when her right thumb flicks up and falls, mimicking the gesture that told her drone to release its payload on a school someone had misidentified as a military target.

Reliving the trauma, her hands shift again, swinging the drone around for an after-action sweep. When she sees them—the children strewn amid the rubble—she shudders, abandons the phantom controls, and paws at her eyes.

I hear Marie tell the operator, “Yes, she received the T-900. This hasn’t happened for I don’t know how long.” She looks at me. “EMTs are six minutes out.”

I nod. Dad says, “Tell them to turn around. She won’t consent.”

Sean keeps talking to her until Mom blinks a few times and licks her lips.

“This isn’t right,” she says. Then she’s angry, eyes wet. “What the hell are you all doing letting dinner get cold?” She pushes Sean away and wipes her face with the back of her hand.

“I know,” she says. “It’s Thanksgiving. Where the hell else would you be?”

My father sighs. “It’s been happening like this. But the VA says there’s nothing they can do unless she wants the implant removed.”

“And that would mean a mandated therapist?” I ask.

He nods. “And their drugs, probably. You remember what she was like on those pills.”

“A zombie”, I whisper, “prone to violent outbursts.” Because I’m the oldest, and I remember things—the drinking, depressions, and rages, the visceral feel of her hands—things Sean, as the youngest, never knew, and Marie mostly recalls as philosophically formative to her anti-war zeal.

“She’s not the only one.” I squeeze his shoulder.

“She doesn’t want to be like that,” he goes on, “like she was before. But,” I hear the thought catch in his throat.

He nods. “Sometimes after it happens, she can’t remember things. Other things. It was only supposed to make her forget the bad stuff.”

The paramedics arrive and ask Sean to give them some room, but he stays close. Mom complains relentlessly about her signature gravy being left to congeal.

She looks at the EMTs apologetically, “You two are heroes, but I’m fine, really.”

“Guess it takes one to know two,” Marie mutters from the kitchen where she’s getting another glass of wine. I’m left standing next to Dad, surveying the half-eaten spread and the family photos on the walls.

“Well, she’s lucid and stable,” one EMT says to us, “but we still think she should come in.”

After they leave, I follow her into the bedroom—she’s unsteady on her feet but shrugs off the hand I put on her arm as she shuffles over the oatmeal-coloured carpet.

She lies on the bed, and I sit with her, hunched on the edge of the mattress, listening to Sean and Marie argue as they clean up and get Dad into his easy chair.

Finally, she says, “Guess I ruined everything.”

Out of habit, I say, “It wasn’t your fault.” Then I surprise myself. “But, I think you should go back to the VA.”

“I don’t want to talk about this,” she says. “Go help your brother and sister.”

She grabs my arm, meets my eyes, “You remember everything I did. I don’t know how much I’ve really changed and how much was the implant. I don’t want to darken anymore lives.”

I hand her my phone. “You taught me the best way out is always through.”

She takes it but hesitates. “Haven’t we all been through enough?”

I don’t know how to answer.