May 15, 2019 Damaris Browne, Fantasy, Magazine, The Slave Girl and the Storyteller 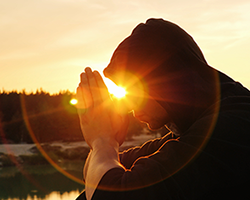 Akiowa stopped well short of the village, expecting the spear to give her the Storyteller’s call, but it urged her further forward. She stopped again at the well-tended fields of beans and maize, then at the nearest dwelling. Still the spear pushed her on.

The village seemed deserted save for sleeping dogs— no one weaving or making new bows, no children playing, no old folk gossiping in the evening shadows.

Then she found the villagers—fewer than she’d expected—standing before a staff of painted wood. Their totem, she guessed. But if this was a festival, where were the drums, the dancers? Arms outstretched, the villagers didn’t speak, didn’t move. Yet whatever else was missing, joy was clearly present—it shone on their rapt faces.

As the villagers let their arms drop, the spear sent its thrill into Akiowa.  She gave the Storyteller’s call.

People started in surprise, but save for a few excited children, who were rapidly called back, no one moved until a tall, handsome man stepped out. Not the headman, for that was surely the old man dressed in lionskins standing behind him. The shaman? But he wore no spirit necklace, and would even a shaman dare take the headman’s place in welcoming her?

“Greetings, Storyteller,” said the man. “I am Pawau, priest to the Believers. We are close to completing our worship. Join us, then we shall eat together and end the day with your stories.”

Priest? Worship? Akiowa could only nod, confused by the strange words.

Standing beside the totem, Pawau talked about the Earthmaker. Akiowa lost herself in his beguiling voice, in the hope and promise of his words—a land of peace, a life beyond death. When he said “Take, through me, the One God’s blessing,” she would have gone with the others to receive the touch of his hands.

But her feet were rooted to the ground. And the sharp angry pain which coursed through her body was worse than anything the spear had delivered before.

She sat between Pawau and the headman for the meal, the villagers sitting before them, but only the priest spoke, mostly of his discovery of the One God and his journey seeking those worthy to hear of Him.

Akiowa knew of the Great Spirit. The totem of her village—the white wolf rock—honoured that part of him which dwelt within the wolves who’d helped and protected her people from time out of mind, teaching them how to live, leading them from the desert to their valley home.

But Pawau’s belief unsettled her, this Earthmaker who scorned the spirits of bird and mountain, beast and lake, who decreed if men were worthy. She would have called it wrong—she felt sure the spear called it wrong—but she saw the bond of joy it created among the villagers, united in this great secret. Was Pawau right? Was this the happiness she sought?

Without warning, the spear pulled her to her feet and raised itself above her head.

The villagers fell silent; expectation shivered the air. When the spear thrust itself into the ground, the calls began. No tingle ran along her arm, though; her mind and mouth remained empty of stories.

Still the calls came. Still she waited for the spear. She looked at each villager, even Pawau and the headman. All called for a story. Why then was the spear quiet? Panic gripped her. Was it punishment for listening to the priest?

Gradually, the villagers fell silent again. No expectation now, only unease—some glanced towards a birthing hut at the edge of the village. Finally, Akiowa understood. Everyone had to attend the Storytelling. Even slaves, as the silver miners had known.

“Yet not all who dwell here,” she countered.

“We cannot admit Betrayers to our gathering.”

“Betrayers? Those you deem unworthy?”

“Those who turn from Him, or consort with them. I sorrow if you decide to withhold the Storytelling, but so be it.”

Did he sorrow? Or had he always known the stories would never be told?

Akiowa pulled the spear from the ground and started towards the hut. Pawau went to seize her arm, but the spear twisted in her grip and knocked him away. Rage distorted his face.

“Should I choose,” said Akiowa – and she marvelled they were her own words, not the spear’s – “you would hear me though your ears were cut from your head.”

The woman was thin, hollow-eyed, her voice croaking with disuse.

“Shame it is to say, Storyteller, but when Pawau arrived not everyone accepted the One God. They had to go, so we Believers would not be tainted. To my grief, my sister, heavy with child, cleaved to the old ways, so left. But days later her man came to me secretly. The child was stuck within her. I was birth-woman for the village. She needed me.”

“As I should not have done.”

“As you had to do,” said Akiowa, angry beyond measure. “He starves and shuns you for saving her life?”

“Not starves. Food is left for me, and I may tend a piece of land for crops.”

“He starves you of companionship, of acceptance. He’s killing you. Leave with me. I’ll help you find your sister.”

The woman shook her head. “I cannot. Without Earthmaker, I am lost. Here I am in His presence.”

“The Great Spirit is everywhere, in everything.”

“The One God comes only to the Staff. And at night, I am permitted to leave the hut, to stand before Him and repent.”

She stayed with the woman till dawn, talking to her, letting her talk. When the woman eventually fell asleep, Akiowa crept from the hut. Pawau stood by the totem. He turned his back on her.

“Spear, we must do something. Make him listen, make him take her back, make her happy.”

But the spear remained silent.

Akiowa stared at Pawau. There might be joy in his belief, but there was injustice, too. She walked away, still grieving for the woman, still seeking happiness.