March 15, 2019 Damaris Browne, Magazine, The Slave Girl and the Storyteller 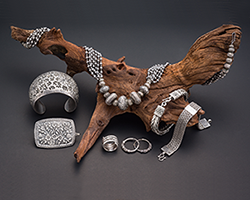 At last! Akiowa had lost track of how long she’d been walking towards the mountains, though awe at their magnificence had long since faded into acceptance. But here were the foothills, and the spear was guiding her towards a great cleft in the rock. Excitement claimed her. The silver miners’ camp had to be close.

Since leaving the old man and his wretched independence, the spear had kept her away from villages, and she’d met only a few hunters and a family who were resting alongside their canoes on their journey down a wild river. The spear had given her stories for them, and in return they’d shared food and tales of the miners’ wealth. “If only we were rich,” a child had sighed. “How happy we’d be.”

Of course! Happiness would be found with riches. Akiowa had hugged herself when the spear agreed to take her to the miners, and now she was nearly there.

Akiowa skirted a towering boulder of rock, then stopped in surprise and alarm. Several hundred paces ahead, stretching across the cleft, an enormous wooden barrier rose out of the rocky ground, each thick stake a giant fir. Dismayed at the outlandish sight, she didn’t notice the men watching from the top of the barrier, bows drawn, until one shouted.

Fear constricted her throat, but the spear sent its thrill up her arm, invoking the Storyteller’s hail. “Old story, new story,” she cried, her weak, wavering tones transformed to a clarion call. “Tall story, true story.”

The man beckoned her forward. As she reached the barrier, a heavy gate opened in it. The headman stood there, clad in ceremonial skins.

“Enter and welcome, Storyteller! You’ve come at a good hour. We’re preparing a feast to celebrate the discovery of a new seam.”

Akiowa entered and was dazzled. Every man bore the clothes of a chieftain – skins of mountain lion or lynx, capes of winter fox, armbands of silver, necklaces of turquoise. Every woman wore a dress of pierced and painted doeskin, while silver and coral blazed at wrists and fingers, necks and ears. Everyone smiled and laughed.

Akiowa assumed she’d tell the stories in the huge timber building where the feast was being prepared. But the men atop the barrier couldn’t leave it; since everyone had to be present for Storytelling, the tribe was gathering in its shadow. But as yet only a few sat, and no one was silent.

“I’ll hurry them up,” the headman muttered, and strode away.

Everything was so new and strange and wonderful, Akiowa wanted to follow him, to explore the feast-hall, the wooden dwellings, and the holes which gaped in the hillsides. She contented herself with gazing at the people and their rich clothes and jewellery.

One man stood apart. He alone wore no finery, only buckskins and a necklace of bear’s teeth which proclaimed him the tribe’s shaman.

One woman stood apart, too, but she was laden with enough jewellery for a village. Young, beautiful, she carried herself proudly, and several women cast envious glances at her. Their whispers came to Akiowa.

“How can Eteniyah have yet more necklaces?” asked one, venom in her tone.

“Because her man cheats at the weighing. He swallows the smaller nuggets and waits until his body passes them. So he keeps silver for himself instead of sharing it.”

“Our men should do likewise,” said another. “We deserve everything she has.”

Akiowa suspected Eteniyah heard, for she smiled. Moments later she approached Akiowa. “Storyteller, your first story tonight should be mine – Gracious and Worthy Eteniyah. This is yours if it pleases me.” She held out a silver pendant, inlaid with an eagle design in gold. Akiowa had never seen anything so lovely. She went to touch it but Eteniyah closed her fist over the silver. “If it pleases me.”

Torn between desire for the pendant and distaste that Eteniyah thought a story could be bartered for, like a sack of meal, Akiowa couldn’t reply. Then the headman was at her side again.

“They’ll be out soon, Storyteller. They’re just being tied.”

“Always when they’re above ground. We have to be careful. They’d murder us and steal everything given the chance. Though they’re not alone in that. You’ll have to tell me what plans the nearby villages are making. They’ve kept the bargain so far, bringing us food, but we can’t trust them. They’ll attack one day. We have to be ready.”

She turned to look; sickness rose in her gorge. Stumbling from a pit came bruised and bloodied men dressed in rags, their hands tied, ropes hobbling their ankles. Slaves.

Revulsion choked Akiowa. She wanted to sit alone, weeping, but with everyone assembled and quiet, the spear thrust itself into the ground. Yells and calls and cries burst forth. Even if she’d wished to choose Eteniyah’s story – anyone’s story – she could make out no individual voice, no clear words, in the tumult. Yet the spear evidently could, for it jolted her into raising her hand, then when silence fell, sent words into her mouth: “True story. The Miners who Delved too Deep and Lost Themselves.”

Yells and shouts again, this time accusatory, directed at the shaman.

The headman jumped to his feet. “Is this your story, Guyapey? How dare you?”

The shaman stood. “I dare because you won’t listen to me. We have delved too deep. We offend the spirits of the mountain. Children die in the seams; men are crippled. We’ve poisoned ourselves with greed and slavery. It has to stop.”

More men stood, crowding around the shaman, angry, arguing. Akiowa could bear no more. She pulled the spear free and left them.

Eteniyah followed. “Guyapey can’t have paid you to tell his story first, as he has nothing. Was it because I didn’t give you the pendant? Here. Take it.” She pushed it into Akiowa’s hand. “I want my story.”

Akiowa caressed the silver. Wealth. But wealth’s joy was tainted.

She let the pendant fall to the ground, then she walked away to continue her search for happiness.