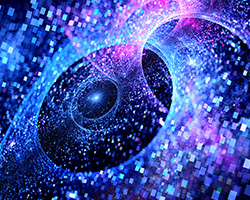 Times aren’t easy in academia here but our astronomers can recognise a pork barrel at 50 megaparsecs and scrape it clean from a lot further than that. So after the climate crash/panic of ’47 we focused our instruments on new pots of money.

This is our first attempt at communication. Dark matter signatures prove you are out there, and we expect each of you discovered us and our many brethren. We hope you’ll understand this or one of the accompanying translations.

Here (as for you?) with sea levels rising and coastline property values tanking, Congress threw money at any half-baked scheme to fix the environment. Geoengineering was the favourite from the more reasonable ideas, but we got in there swinging; we can handle a gift horse. We needed millions but a drowned government isn’t expected to pay its debts so we got funded.

Then I got in touch with good people worldwide: here, Europe, Asia, South America, Africa. Cosmology, like sea level, is truly international.

We’d discovered parallel universes and our plan was to find a way to dump our carbon dioxide in one. Obviously, if feasible, we could dump other garbage: radioactives, pesticides, heavy metals, excess seawater even, solving all those problems at a stroke. If not, well, we had the grant.

We wanted to create a gate or ‘chute’ to tunnel through into deep space in a parallel universe. We soon learned that was only practical with matching gravitational fields at either end of the link, which was useless. Who’d need parallel universes if we could get the CO2 straight into space?

The alternative: dump it on a parallel planet, preferably uninhabited. Any other would be unethical, and disastrous if the inhabitants retaliated. So we (like you?) searched for a parallel dead world: rocky, Earth-size but with no atmosphere. Our exploration tools were gravity, dark matter signatures and dark energy potentials.

Our research had two strands: one, tunnellers had to find a way to construct the ‘doorways’, and two, searchers had to discover a suitable parallel Earth – para-Earth. Cosmologists, astronomers, astrobiologists, physicists, mathematicians, engineers, IT and quantum computing experts filled both teams.

Proving a paraplanet is dead, when all you can analyse is its gravity, is not easy. Eventually we could detect oceans or large seas, especially if there was a moon, but an atmosphere – or its lack of one – was a much harder problem. The assumption was no atmosphere, or a very thin Mars-like one, no highly evolved life. We could never prove anywhere devoid of life. We discovered innumerable para-Earths with both a topography like our own, gravitationally at least, and the large open bodies of liquid that imply an atmosphere. We began to despair of finding a ‘dead’ world.

Luckily advances in quantum computing came to the rescue by enabling us to search multiple universes simultaneously. So we found millions of para-Earths, many with technologically adept inhabitants. Our attempts to contact you began then, but dark matter communications proved more than difficult and you know the result. However, at last – the Answer to a Maiden’s Prayer – just as our grant needed renewing, we detected a ‘dead’ planet with Earth-like gravity but we haven’t found another.

Several fat grant years followed and they were good ones. We showed that transfers via inter-universe chutes destroy complexity. Large molecules disintegrate; CO2 stays CO2 but bacteria, proteins or viruses split into simple molecules. Solids become liquids or powders; information loses coherence. For communication across parallel universes, dark matter Morse-type codes or other linear signals look interesting but the maths indicates there is a time dimension to the output that destroys meaning. We developed a promising stochastic method, using quantum computing, to extract meaning from any transmissions but nothing intelligible turned up.

The chutes became gates to the planet-size free garbage dump that we named Atamp, and the first models were installed in big fossil fuel power plants and along coastlines to reduce flooding by transferring seawater. The technology improved year on year, miniaturising the chutes and making them cheaper. Engine exhausts, sewage plants, farms, crematoria; exploitation rose exponentially and soon everywhere there was waste there were minichutes. Nano filtration technology made sure we didn’t lose the atmospheric gases and materials we’d like to keep. The Earth would suffer had we kept exporting its seas into a parallel universe, so control over the large chutes was extreme but the control over their smaller brethren was ubiquitous. When the excess CO2 dissolved in our oceans began to fizz back out we knew we’d turned a corner and everyone cheered.

Gradually, we found exporting waste to Atamp took more and more energy so our triumph was short-lived. Investigations showed Atamp’s gravitation increasing rapidly. The increase far outweighed any equivalent reduction here. Something was raising Atamp’s mass much faster than anticipated. Dark matter research had moved on to studying inhabited para-Earths so we refocused on Atamp. Soon we had the answer: the millions of inhabited para-Earths we’d discovered were facing the same global problems as ourselves and most found the same answer; our answer. Our private garbage planet is shared with so many para-Earths that its mass increased until its gravitation no longer matched our own.

Atamp was used up. The planetfill is a planetfull, and our grants were withdrawn.

With a huge postgrad student programme still running, cooperation with para-terrestrials across parallel-developed Earths looked like our next step. Theoretically, triangulation, or multi-angulation if you prefer, will enable us all to detect Venus-like and Jurassic age paraplanets. There should be more of these and they could take extra CO2. We’ve applied for the grants here; you should too, before it’s too late for us all.

Hence this message and its translations are targeting as many para-Earths as possible. We used the last of our grant to get the linguists on board and hence some messages will utilise non-linear scripts – hieroglyphic, cuneiform and modern Chinese. There is no reason to translate them all, unless you can get a grant.