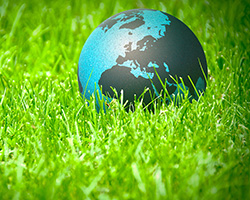 Grant ducked and hoped he’d been fast enough to avoid being spotted. He knew there were dozens of the monstrous beasts in the hollowed out cavern, and he had no idea what direction they would come at him from. His stun-gun sat uneasily in his now sweating palm, but he knew there wasn’t enough juice in it to take all of them down. He would have to be lucky. After a moment of silence, he once again heard an occasional grunt, and the constant humming of the large, blue, glowing power source from the centre of the room.

Knowing he had to do something, and quick, he crawled down the hall. The floor was a dusty, red shale and his hands and knees were getting cut up and raw from rushing across it. Better sore hands than being dead. He slipped into a small opening in the wall and crouched down, hoping to catch a peek of what was going on in the room. Apparently at this point, he hadn’t been seen, but he knew his luck would run out sooner or later.

A voice began blaring through the speakers of the cavern. The acoustics, mixed with the fact that it was in an entirely alien language, gave it an ominous tone. His heart raced at the new information. This couldn’t be from the grunting, howling monsters, so it had to be from an outside source. Was there another race on this planet, or was this voice being transmitted from far away? Perhaps from one of the ships depicted on the cave walls in a crude triangle shape.

Cursing himself for not thinking of it earlier, he grabbed his imager, and set it to voice record. He used this for taking pictures of terrain and keeping notes of weather patterns, and flora and fauna. The memory was only a quarter used up, mainly with images of the storm, and plants from the first couple of days on Hawking. Soon he was sitting there in the dark, his back tight in the cramped space, recording an entirely alien broadcast.

Karen Bilson watched out the lander’s view port with awe. The land looked so lush, she could hardly believe they were going to colonize such a wonderful-looking place. But still there was an aching in the pit of her stomach that wouldn’t go away. For starters there was President Carne’s callous attitude and leaving Earth’s population behind to die, then Grant’s going missing shortly after arriving, not to mention that alien transmission they still hadn’t been able to decipher.

On that thought she buzzed Seeker, which was still floating in orbit.

“We are about to land. Any development on the transmission we’d picked up earlier?”

“Yes. I think we’re about to crack it. It seems they have many more letters than we do, but the program expects to know the results in less than an Earth’s hour.” The voice sounded pleased with itself.

Karen felt a small triumph at the news, and knew it was important. There was more going on here than she knew, and she couldn’t let Carne jeopardize the whole mission. She’d heard that alien language in his office, and if he didn’t know who it came from, she would be very surprised.

“Very good. Please keep me posted. I need to know what it said as soon as you and the program finish.” She ended the communication and tried to relax as Penner took them down to the ground. She looked over at the other two officers and smiled, trying to convey a calm demeanor, though she was still in knots. The feeling of being here was a juxtaposition in the full sense of the word. On one hand, they were starting again, on the other, she wasn’t sure the cost was worth it.

The lander shot down toward the ground and soon they were lowering to the thick, green grass.

“So this is where Grant last transmitted to us?” she asked Penner.

“Yes, ma’am. Looks like that storm we picked up was here not long ago. The ground is soaked.”

The lander touched down and Karen realized they were now the second ship to ever land here, and she would do whatever was required to see Grant make it back to his family.

“Commander…” Penner cut himself short and pointed out the view port. Pieces of a Union issued lander were strewn across the ground. Grant was no where in sight.

The broadcast stopped just as suddenly as it had started, and once he gathered enough courage, or as he thought at the moment, stupidity, he poked his head out of the hole he was hiding in. None of the creatures were in the halls near him. That was good news. Maybe he actually had a shot of getting out of this death trap after all. His hopes dropped when he heard the shuffling of many feet coming his way. He crammed himself back in the rock cut-out, holding his now shaky breath for fear of giving himself away.

The ground shook as they walked by, their immense combined weight rattled dust and dirt off the cavern’s ceiling. It fell in piles on his head, and he closed his eyes to keep it out of them.

When the dust settled, he waited another few minutes before testing the waters again. This time the room was almost dark, save the constant blue glow from the power source. He climbed out, stun-gun in his hand, and looked around. None of the creatures were in sight, but something near and dear to him was.

Not ten feet from the middle of the room was his transmitter.