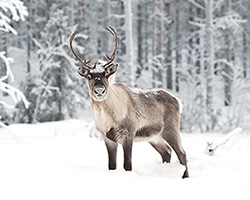 The spear again pushed her forward, but Akiowa held her ground behind a large pine. “No,” she said. “I don’t want to meet them.”

For some time, torn between curiosity and dismay, she’d been covertly watching the people bustling around on the far side of the frozen river.

Curiosity, for they were surely the nomads her father had once talked of – wanderers who followed their deer herds over the bleak, snow-buried land to which the spear had brought her. Everything about them was fascinating – their furs and colourful clothes, the tents they were dismantling, the pole devices for hauling baggage they’d strapped onto their large, strange-looking deer.

Dismay, because the people were obviously unhappy. Everyone’s expression was grim, children wailed, and by a lone juniper two old women sat apart, stone-faced, as if resigned to a terrible but unavoidable fate.

Dismay had won. Akiowa felt sad enough already – troubled by the unhappiness she’d met elsewhere, distressed at being unable to help, at not understanding how to help. She couldn’t bear the weight of more misery, more failure.

“Can’t you show me happiness?” she pleaded. The spear’s reply was to send its thrill into her mouth; the Storyteller’s call burst from her.

The bustle abruptly stopped. Akiowa sighed, but the spear had given her no choice – she had to show herself. She stepped out into the open.

Across the river, children hid behind their parents’ skirts or stared at Akiowa open-mouthed; adults looked uncertain, even nervous.

“It’s Woman Without Furs,” said a wide-eyed girl. “She Who Laughs at Cold.”

“She Who Scorns Tradition,” breathed a youth, awe in his voice.

“The tales are true, then.”

“The tales are true,” said a man of middle years. “Greetings, Storyteller,” he called. “I am Tuktu, First One of the clan. I was a child when last the caribou heard your tales, but well I remember the magic you wove. Though clamour and argument followed, gladly would I hear the magic again. We are nearly ready to leave. Will you walk with the caribou and tell your stories by our fires tonight?”

“Will all the clan hear my stories tonight?” the spear asked through Akiowa.

“All those who journey onward will hear,” said Tuktu. He glanced at the women by the juniper. “You know our ways, Storyteller. The caribou cannot wait for the old and weak.”

“Then the caribou must wait while I tell my stories.”

“They’re anxious to be gone—”

To everyone’s amazement – not least Akiowa’s – one by one the caribou grunted, carefully lowered themselves to the ground, and began chewing the cud.

“Did you do that?” whispered Akiowa.

The thrill the spear sent up her arm seemed very like a laugh.

Akiowa brought the fifth tale to an end. With barely a pause, the calls began again, even the youngest children now understanding what to do, alive to the magic of the Storytelling.

“New story,” called one. “The Caribou that Swam with Seals.”

“Tall story,” yelled another. “The Caribou that Went to the Moon.”

“Choose one of them,” Akiowa murmured. “Let them not be discouraged.” For so far the spear had chosen only tales sought by the old women. Stories which spoke of the value of age, where, through wisdom and experience, the old and infirm saved their clan from disaster.

“New story,” said the spear through Akiowa. “The Caribou that Swam with Seals.”

Everyone fell silent, save for a little girl who cried excitedly. “That’s my story!”

Relief flooded Akiowa. Then the spear filled her mind with the tale, and she struggled not to laugh. “Long ago, when the world was not so young, a caribou asked a crippled old wise woman for help …”

Akiowa pulled the spear from the ground. “So ends this Storytelling. For the caribou have far to walk,” the spear added through her. “They’re anxious to be gone.”  The beasts were indeed getting to their feet.

Slowly the clan stood. The bustle began again, but with many shaking heads and glances at the old women.

“Your magic has not diminished, Storyteller,” said Tuktu, standing alongside Akiowa. “Your stories speak clearly, as they did so long ago. But it is our way to leave the old behind.”

“Many times when I was younger, afire with the memory of your tales, I argued for such a change. The First One would not listen.”

“Now you are the First One.”

“So I’m responsible for the clan. The old cannot walk all day as we must, to keep with the caribou. They cannot ride as children do, for the caribou cannot bear their weight.”

“Do your tents and baggage walk all day?”

“We do not use travois for the old. To go against custom …”

“Custom adapts. Once, a caribou threw itself into the water to swim. Now, all caribou swim when they must.”

Tuktu shook his head. “Custom preserves us. It tells us who we are. If we change this, what else will change? If too much changes, who then shall we be?”

“A caribou that swam with seals remained a caribou. A clan which keeps its old remains a clan.”

“Perhaps. Or perhaps by changing our way, we shall lose our way.” He took a deep breath. “Well, we shall see. For I will heed your words. We will try a new way.”

He turned back to his people, who crowded around him. Moments later men were cutting pine branches to act as poles to carry new burdens. The two old women were embraced by their smiling families, their packs added to baggage already stowed on the travois. Happiness shone on their faces, on everyone’s face.

Understanding struck Akiowa. The spear’s stories had power. They could change the way people thought, though it might take time. Yet …

Yet, why didn’t it always tell the tales which were needed, which changed people?

What had old, blind Nokomis said? You can’t easily open a door-flap if those inside the house have fastened it shut.

Perhaps the spear could change nothing if the door was shut too tight. And it could only choose stories people wanted, constraining it further. She had to help it, to pull the door wide open.

This was how she’d find the happiness she sought. Happiness for others, at least. Not for herself.