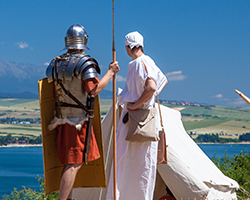 Such an inhospitable country. A few inches of soil over granite was barely enough to support the growth of straggly grass and the wild horned sheep that grazed there. One of them watched him now, from the top of a pile of damp grey rocks. Those yellow slitted eyes seemed too intelligent for a sheep. More intelligent than some of his officers, truth be told.

Lucius turned and shouted down the hill. “Aurelius!”

“I fancy mutton for dinner. See to it.”

Aurelius saluted, then his eyes drifted towards the sheep, silhouetted against the haze of a mid-morning sky, and he frowned. There were stories told around the campfire, grim tales of what would happen to those who killed the local sheep, and now here was one of those sudden local mists creeping across the ground towards them.

The second-in-command turned to the nearest legionary, young Paulus, who had the dark-shadowed eyes of a Hispanic. The boy was ambitious, keen to please, eager for promotion.

Paulus started as if he’d been lost in a dream.

“The Tribune wants mutton for dinner. See to it.”

The young man saluted, turned on his heel, and disappeared into the misty drizzle.

Paulus hated this cold, damp country. He’d had a girl, back in Rome, who’d brought him joy, but here at the edge of the Empire, he only wanted the years to pass so he could go home.

I can help you with that wish. The voice whispered through the mist, all around him and inside him at the same time.

Silence. Then a clatter of loose rocks made him jump. His gladius was in his hand, though he had no memory of drawing it. Something moved in the fog. He tensed, elbow bent, ready to strike.

The sheep looked startled, almost indignant, as Paulus’s sword sank into its chest. It tried to escape, legs scrambling, but its eyes were already beginning to glaze as its lifeblood splattered across the rock. Its knees and hocks folded, dropping its weight onto the end of the sword, pulling Paulus off-balance.

Training kicked in. Twist-and-pull. The sword came free with a sound like a boot released from mud. He straightened, panting, nerves stretched too much for a simple act of butchery. He tried to quiet his rasping breath, straining to hear, but the only sound was the slow settling of flesh, the release of gas as the sheep’s muscles sagged.

Too quiet. He couldn’t be more than a hundred paces from the camp, but where were the sounds of banter, the clink of shovels against stone as latrines and defensive trenches were dug?

He shook himself. He was letting this terrible country wear him down. He was a member of the IXth Hispania, a proud legion, not some superstitious peasant.

It took him little time to bind the legs with a strip of plaited leather he kept around his waist. He was powerful, for his slight build, but the sheep took all his strength to hoist across his shoulders.

Now. Which way back to camp?

Lucius awoke with the mother of all hangovers. His spinning thoughts focussed on one culprit: that cursed local brew. It packed a kick like a Hispanic mule. Then memory returned in a haze of flashes, like images of a battle carved in stone.

He’d walked away from the camp, to where the sound of a stream trickling in the heather promised cool, clear water. Then the mist had descended, and he’d not known which way to turn. The heavy fog had deadened all sound, so he couldn’t even follow the voices.

Stumbling around blind had seemed a bad idea, so he’d found a boulder and sat down to wait it out. In these parts, the mist could depart as fast as it came, so it was worth waiting a while. But that was the last thing he remembered, until now.

He probed the back of his head with careful fingers, and winced. Yes. Someone must have hit him with a rock. He blinked, trying to focus. The mist had cleared, the last wisps evaporating as he watched, but now it was full night. Above him, stars twinkled in the heavens. How much time had he lost?

And where was the camp? With the mist lifted, he should have been able to see the fires burning, and the torches planted along the boundary, but there was only open country in all directions. Had he been moved? Dragged away from his army?

No. With the eye of experience, he recognised the shape of the surrounding hills, just as that glance at the sky had showed him familiar constellations. If he’d moved, it wasn’t far.

Then he tilted his head back and stared once again at the night sky. Familiar constellations, yes, but not quite as they should be. Septentrio had changed shape. Only a little, but enough for him to be certain he wasn’t imagining it.

Then a terrible noise broke the silence. Lights and a pressure bearing down on him like a storm-wind. He staggered backwards, but before he could take in its shape, it had gone, the screaming noise fading away into the distance. The lights it carried as it flew through the heavens blinked in white and red and green, like the eyes of a wild animal at night, caught in torchlight.

Lucius realised he was trembling. He clenched his fists and took a deep, steadying breath. The native guides spoke of strange gods and goddesses in this wild land of Britannia, but no educated man would believe such tales.

He filled his lungs with air, scenting for danger. There was no hint of wolf or bear on the breeze … but there was something else. Something unhealthy, stinking like the black bitumen Egyptians used to embalm their dead.

Lucius turned, alarmed at how the ground seemed to tilt beneath him. That must have been some blow.

A young legionary stood there, like the Christian prophet, a sheep draped across his shoulders. He even had an Eastern cast to his features, as if he could have come straight from the land of the Christians’ Messiah.

“You wanted mutton for dinner, sir?”