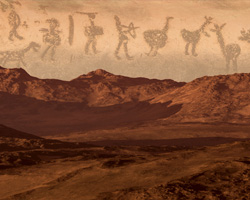 Beads of sweat poured down Grant’s back as the sun beat down mercilessly. He’d been travelling all day in the heat, trying to track the creature that had been at his lander. At this point he had no idea if the tracks he sporadically saw were from the same one, but he had nothing else to go by. It was doubtful that help was coming for him: there was no way to contact anyone. He had taken all the supplies he could carry without hindering his movements too much, but they were limited.

Stopping, he pulled the ripped T-shirt off his head and wrung out the sweat. Maybe he should have left it on to stay cool. Nothing was clear to him. The whole mission seemed so absurd now. Here he was stranded on a semi-hospitable planet – by far the best-case scenario Earth had ever hoped to encounter. He had no way to know if they’d gotten his initial messages. He silently prayed they had, and someone was on their way.

His worry about the storms being too much were distant memories. Now he was more worried about sharing the land with whatever was out there. He was willing to wager a beer that President Carne would decimate them on sight. This was too important to risk on some animals, even if they happened to have opposable thumbs or a language.

The ground was hard – almost like a red clay or shale substance. The terrain was changing and it was getting more difficult to see any sign of the footprints. He saw a cliff wall up ahead, with what looked like water next to it, but Grant knew that could be a desert mirage. God knew he was starting to see things out here.

His head was getting lighter and his footsteps heavier as he spotted a large, out-of-place rock growth. A loner standing its ground amongst the hard rock. He felt a kinship to it out here. As he neared it, a hint of electricity hummed in the air. A quick check with his Geiger counter told him there was no radiation, but something was definitely off here. The rock was about ten yards tall, and as he walked around it he found an opening. The humming was louder now and lights blinked on and off inside. He pulled his lantern out and held the soft light in front of him, feeling his pulse race at what he saw.

Here, in the middle of a world that was supposed to have no life on it, there was some sort of alien computer terminal. The screens were dark, but there were symbols on the machines that he’d never seen before. A noise from outside snapped him out of his reverie at the screens and blinking lights. Flicking the lantern off, he pushed his back against the cavern wall and tried to calm his breathing. Enough light crept in for him to still see the wall right before him, and he quickly noted the drawings scribbled on it. They were done high up, maybe seven feet up the wall.

Drawings of triangles in space, and what he assumed were the three-toed beasts watching them with their heads tilted skyward. The dual moons were etched in the background. They reminded him of the drawings in Egypt from old Earth, if a bit more crudely done.

It was obvious this device was left here for a reason, but who could have left it? It was highly unlikely that a huge creature walking barefoot would have this technology. But how did he know that? For all he knew, they were super-genius monsters from Planet X. He laughed, thinking about watching cartoons with Beth.

Another footstep outside stunned him to silence. He blew a few rapid, tension-filled breaths as he tried to keep quiet from whatever was under him. Once he felt under control enough, he risked peeking around the corner. It was one of the creatures.

It was at least eight feet tall, and wider than a rhino; it walked on two legs, powerful arms hanging past its knees. He had the urge to pull his stun-gun but decided the movement would be too risky.

A quick sniff in the air with large wide-spread nostrils, and it began to walk away. Grant’s heart was beating so hard he thought for sure it would hear him. Thump thump, thump thump. It paused and started to turn to him. He held his breath and fought to not close his eyes. Just before it started to look back, a howling started from the direction of the cliffs.

As quickly as he heard it, the wind blew in hard, and instantly clouds covered the beating sun. The humid air turned thick as a storm brewed faster than any Grant had ever seen before. The howling continued and the creature looked to the sky and joined in the howling. It was terrifying, so close by. The hair stood up on the back of his neck as the ominous noise raced through the land.

Rain started to pour down in sheets, and Grant still didn’t move until the beast was a little farther away. As it walked on, he saw something glinting in its meaty grasp. His transmitter hung there in its grip.

“Take it in, everyone,” Karen Bilson said in front of her crew. The view-screen showed nothing but the beauty of space. “We are the first crew in history to be this far out, with the exception of the hunters we sent out on their solo missions. We are one final step away from reaching Hawking, where Grant has landed. We’ll be the first settlers of a new world, and this time we’ll do things differently.” As she said the words, she could only hope they were true. With men like Carne running the show, she wasn’t too sure. But she knew she would die before she let Hawking have the same fate as Earth.