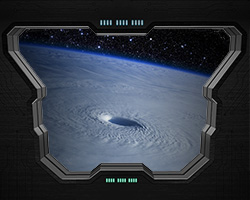 The Seeker had reached astronomical speeds, but the problem with the technology was it couldn’t just slow down with out ripping the ship apart. The deceleration process took light years, and Karen was told it was much like a speeding car using a parachute to slow itself. Except there was no physical tarp, but rather a force shield that grew incrementally at the front end of the ship. Too much too fast and they would all die, but with the proper calculations they should arrive into Hawking’s orbit. Karen hoped they had the exact right distances or they could end up shooting past it, or into something – mainly one of Hawking’s two moons.

“Penner, are we confident in the force shield?” Karen asked.

Penner gave her a slight head turn and nodded. “Yes, Commander. Plus, we have no choice. We’re heading into another system full-speed. If we don’t try to stop now, we have no idea where we would end up.”

“Begin deceleration in five, four, three, two, one…” Penner activated the force shield and they felt a slight adjustment in acceleration. It was like someone had taken their foot off the gas slightly. Her nerves loosened a bit after the initial worry, and she realized this was actually going to work. In another twenty-four hours, they would be in Hawking’s orbit.

He’d been lucky enough to follow the right creature here, if lucky was the right word for it. The beasts howled from the cliff wall, and his transmitter was well on its way to them. Grant knew he had two options at this point: keep following the thing in the middle of a raging storm, or wait it out in the rock where it was safe for now. And dry.

He argued internally about it for a few minutes while the rain pooled on the ground outside. If he was ever going to be able to reach Earth, he needed that transmitter.

“Screw it,” he said as he slung his pack over his shoulders and took off after the monster at what he hoped was a safe distance. He really hoped they were howling from behind a wall somewhere so they wouldn’t see the puny human coming at them in the middle of a storm: a wet rat looking to steal their shiny object.

Instead of following at a direct line, Grant decided he would cut left and follow along the cliff face. Not only would it give him a little cover from prying eyes, it would keep him semi-covered from the brutal storm beating down on him. It felt like it took hours but when he arrived at the wall of stone, it had probably only taken thirty minutes. He was dead tired. His ankle was still tender and his stomach was growling at him. After a quick hydration and food break, he trudged toward the direction of the creature.

The howling continued as he approached the large opening in the cliff. There was no other place for it to have gone into. After slipping off his pack, he pulled his stun-gun and leaned against the rock. He snuck a glance to ensure the entranceway was empty. No sentry on staff tonight.

He was shaking now, and he knew it was only half because he was soaking wet. What the hell was he doing here? This thing could have gone anywhere. For all he knew, there were hundreds of those things down the hall, and he was about to walk in on their storm chanting and get eaten.

Swallowing the lump in his throat, he kept moving. There appeared to be a full range of tunnels through the cliff, and he now saw torches flickering on the walls. They had fire! It was remarkable. He smiled despite the situation he was in. The mere fact that he was the first human to witness another race, and that this race had the ability to use torches, and fire…it was beyond his wildest imagination. Anthropology was more of a passing hobby from his university days, but the interest in it still stuck with him all these years later.

A ways down the hall he heard footsteps. Grant looked around and saw an opening on the right. Passing through it, he hid in the dark until one of the creatures walked by. Braving a quick look, he saw that this one was shorter and wider than the one he’d seen outside. With a new resolve, he kept on down the hall. It led him to a massive, well-lit room.

He couldn’t believe his eyes. Inside was what appeared to be an energy core from a ship. A ship he’d never seen the likes of before, only there was no ship here. Perhaps this was powering the outposts like the one he’d just seen.

His foot slipped and a rock slid down and into the large open room. They all stopped and slowly turned toward him; dozens of eyes looked in his direction.

The technology hadn’t failed them. They arrived precisely when predicted. Karen stood at the helm of the bridge and watched with awe as they approached the beautiful planet Hawking. Their new home.

“Penner, get the landing crews ready. We are going down.”

“Shouldn’t we wait for the rest of the ships?” he asked.

“Carne never told me not to go to the surface.” She’d dreamt of this moment for years, since she’d heard about the possibility of finding a new planet. Now that she was here, she wasn’t going to delay any longer.

“Commander. The transmitter message from Grant appears to have come from this area.” Penner waved at the map on his screen. “Only there is a massive storm raging there at the moment.”

“We’ll go down to the edge of it, as near his lander’s location as we can. With any luck he is still nearby,” she said. “Let’s move out.”