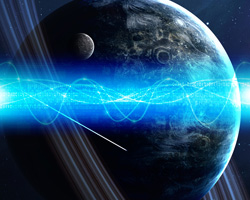 “We are all set to go Commander,” First Officer Penner said, hands hovering over the ship’s controls.

Karen took one last look out the viewport at Earth and said a silent prayer for the people they were leaving behind. “Hail the Santa Maria, please.” She fidgeted with her collar. “In my office please.”

She sat at her desk, empty except for the comp screen. It buzzed and an image of the Union president appeared. “What is it Bilson? You should be gone by now.” President Carne’s face flushed.

“Yes, sir. I just…-” she paused, wondering if she should just keep it to herself, “I want to know if you have a plan to come back and help Earth once we’ve settled?”

Carne’s red face turned crimson and a vein pulsed on his forehead. “Bilson, follow your damned orders and don’t question me again. There are plans in place that are far above your pay grade. Fly your vessel in front of us. Keep us posted and we will be a day behind as planned. If you fail to do so, you will quickly see yourself left behind, alone on the lift to Earth!” The screen went dark.

The guilt that somehow she aided in the world’s death tried to weigh her down, but she knew she had to shake it off and help those she could. The colonists were her main focus now. With a new resolve she walked back to the bridge.

“Penner, take us out.” The first officer smiled and soon the ship was accelerating quickly away from Earth and everything they’d ever known.

They were traveling faster than anyone even twenty years ago had thought possible. The technology seemingly appeared and stunned scientists. The mere fact that no single man was credited with the discovery left a bad taste in Karen’s mouth. Someone had to have created the technology, or at the very least, given them the technology. The stars streaked away in the view screens; planets a blur in the endless black expanse.

Karen sat watching a slowed-down recording of Mars as they passed by it earlier. The Union had tried to colonise Mars fifty years ago, before they figured out how to traverse space at unimaginable speeds. It had failed on each account. Storms wiped out the first attempt, each of the first ten settlers dead within the first week. The second attempt was thwarted by a two-year dust storm that hovered over them, killing their solar charges. They also died in experiment. Earth’s atmosphere was not beyond repair yet at that point, but soon it would deteriorate rapidly. The Great War’s impact would never be reversed. By the time Karen was ten, it was not safe to be outside with no respiratory masks. That’s when the Union stumbled on the new technology and threw everything they had into searching for a new home with the ships they built.

Five small exploration vessels were made and sent out to various reaches of the universe. Grant was sent to Hawking, the basket Carne seemed to put all of his eggs in. It was as if the other planets the explorers were sent to were an afterthought. With any luck, they would be able to join up with the rest of the colonists at Hawking after their missions were over. They had been sent messages with the co-ordinates and their families were all aboard the Seeker along with Grant’s wife and daughter. Thinking of families gave Karen a slight pang of regret. Her job had always come first, and the thought of perhaps settling down at their new home was enough to make her smile to herself.

Her comm beeped and Communications Officer Breena’s voice came through. “Commander, I’m picking up a transmission, but it’s unlike anything we’ve ever seen before. You might want to come here.”

She approached them and Penner smiled as he activated the message. A voice streamed through the comm unlike anything she’d ever heard before. Except, she had heard it before in the President’s office on the Santa Maria. Something was afoot and she wasn’t in the loop.

“Any idea what it might be saying?” She asked, knowing the answer.

“None, but we are trying to have the computer cross-reference with the dialect database. Chances are not good if that’s what I think it is.” Breena paled slightly.

“And what is it you think you’re hearing.” Karen once again knew the answer before she heard it.

President Carne sipped the scotch slowly, its condensation left a ring of water on his desk. He watched the last lift being latched to the Pinta from his view-screen. That was it. They were ready to go. Reports told him that Earth was in an uproar. Violence, looting, death everywhere. He hadn’t expected anything else from the rabid animals. He was now sure that what he was doing was the right thing. No matter the age, war had ravaged the planet. Eighty years ago they were on the verge of solving world hunger, and the Union was formed. A union of nations; no more countries battling with each other. A unified, peaceful planet. But human nature wouldn’t accept that. A handful of countries wouldn’t enter the union, and when they were strong-armed, a war unlike any other was set in motion.

Nuclear weapons were unleashed, chemical weapons ravaged the Middle East and Northern Africa. When it was all said and done, the Union controlled the world, and two billion had died. The atmosphere could never recover from the devastation. Carne knew his history and there was never to be an age of peace. It just wouldn’t happen.

His comm buzzed and he turned to his comp screen which flashed: incoming transmission. An alien language came through the speaker, and Carne smiled as his program translated the message.

He looked at the Earth and said aloud, “It’s all yours.”