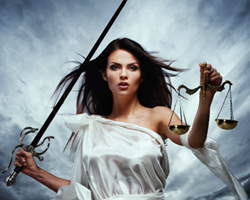 She stands in the shadow of a cliff. High above her are the men who have plundered and butchered and raped across the borderlands.

It’s been two months since she lay on a ridge looking down onto a burning village and discovered Aprakash was the bandits’ leader. Two months in which she’s followed his bloody footsteps through more ravaged villages and small townships, recording, witnessing, collecting every scrap of evidence. Two months in which she has finally reached acceptance of what must be done, what she must do, for at last she understands.

Compassion needs Benevolence – pity can do little without action. Wisdom requires Truth – the lodestar which guides and governs. And the Giver-of-Judgements relies upon Justice, the last gift of the Lady of Six Aspects – both noble ideal and the weapon without which judgements are merely words.

She finishes her scrutiny of the cliff then stealthily returns to the tiny cave where she spent the night. She brought just a few scraps of food and a small pack with her – most of her belongings, including all the evidence she’s assembled, are with her horse in the care of a pedlar two miles away. Whatever happens, the evidence will be sent to the monastery for copying and lodging with the central court administration; if she doesn’t return, everything else will be the pedlar’s.

She’s spent a day and a half examining the bandit’s lair, studying its approaches, its defences. Even at the cliff top they have a guard, though only one, confident as they are of the cliff’s protection. But with more than a dozen men to confront, she needs to wait until the darkest part of the night, for their fires to burn low, their raucous laughter to fade to snores, the guards themselves to be lulled towards sleep by the quiet of the mountains.

Hear my prayer, Lady, and remember me. The men I have sought are many. I am one. But I am also many, if, Lady, you are with me.

Once back in the cave she sharpens her knife – Sukhbir’s knife, the kukri she once feared and hated, twin of the kukri she once refused – then she works through the guard exercises she’s practised so diligently over the last month.

The exercises done, she opens her pack, eats the last of the barley bread, then takes out her bamboo flute – her sole companion through all the long years of her wandering – and Sukhbir’s dragon-scale gorget. Tears prick at her eyes, remembrances of the grief that overwhelmed her at his death. She ties the gorget at her throat and tucks the flute into her shirt at her breast. Whatever happens, Sukhbir will be with her.

Then kukri in hand, eyes closed, she sits back against the cave wall to wait, trying to control her fears over all she must do.

The cliff is steep, featureless. It will be a difficult climb. There have been many other climbs in her life – onto roofs to summon help; down the monastery wall to run away. But the one she remembers best, that still means the most, was in the temple of the buffalo-headed Ishwan, where the goddess first came to her. With the Lady’s help – “Imagine you are a mouse, who cares nothing for this trumpery demon-god.” – she was able to climb the god’s image to return the golden horn caps to him, to defeat Aprakash and his schemes. Now she must climb as silent and as wary as a mouse once again, to defeat Aprakash a final time.

“But this time the Lady won’t be helping me,” she whispers into the emptiness of the cave – she’s reverted to her childhood habit of talking to Sukhbir, though he isn’t there, though he’ll never be there again.

“Have you asked her?” says Sukhbir. Which is strange. He’s spoken to her often enough in the last month, but only in her dreams. She doesn’t think she’s asleep now. She almost feels he’s in the cave with her and she could reach out and touch him – but she can’t bring herself to try, nor to open her eyes and risk losing him again.

“You can’t do it alone,” adds Lal, which is even more strange – and surely she can smell his hard-leather armour and the earthy aroma of henna from the abbess’s hair and skin. “You need help.”

“I tried to get help,” she points out. “I took all the evidence to the provincial capital. No one would listen.”

“Was that truly trying to get help, my dear?” asks the abbess. “Or was it trying to avoid what had to be done, an abnegation of responsibility?”

She bites her lip and can’t answer.

“The Lady promised that if Aprakash became a killer, you and she together would stop him,” the abbess continues.

“That was before I rejected her. She wants nothing to do with me now.”

“But she sent Sukhbir to that village to meet you,” counters Lal.

“For Sukhbir’s sake. He wanted to see me again before he died.”

“She carried me to your side at the ridge, saving your life,” says Sukhbir.

“For your sake again. So you had the death you wanted.”

“The Lady needs you, my dear,” says the abbess.  “Just as much as you need her.”

“Without a weapon no one can win a battle,” adds Lal.

“And a weapon that isn’t wielded is no weapon at all,” says Sukhbir. “Ask her to help you.”

“Ask her,” Lal and the abbess echo.

She hesitates for a moment longer then prostrates herself and pours out her prayer to the goddess, her plea for aid, her plea to be remembered, even as her own memories remind her of all that has passed between them.

She remains still after she’s unburdened herself, hoping to hear the Lady’s voice – it’s been three years since the goddess last spoke to her, three long, lonely years. But the silence is broken only by a sudden howl of wind and rumble of thunder.

She gets to her feet, surprised at the darkness. Was she asleep after all, and she’s slept the afternoon away? She moves to the cave entrance and peers out.

It’s not dusk but a gathering storm. Black clouds roil overhead, turning day into night, the air bristling with expectation. Then night becomes sudden day again; burning, deafening day as a lightning bolt strikes, a thunderclap shakes the earth, and the heavens open.

Another jagged lightning blast flashes down, another crack of thunder booms and crashes. Above her at the cliff top, horses shriek in terror while men shout and scream. A body, burned and blackened, slams into the ground only yards from her feet.

Her plans lie in ashes. The bandits won’t be snoring by their fires tonight, the guards won’t be lulled towards sleep. She has to go now, taking advantage of their panic and the chaos of the tempest.

She’s already noted the best place to climb and she runs towards it, towards Aprakash and his men and the buffalo-headed demon whom they worship. She has passed judgement on them all, and she will execute that judgement.

Lady of the Kukri, whose name is also Lady of the Defenceless, Lady of Justice, Lady of Death, hear my prayer and remember me.

As she sheathes her kukri to begin the climb she looks up at the sky. Shapes churn in the boiling black of the clouds – tigers rip into monstrous horned beasts, and a figure with six arms battles a buffalo-headed demon.

The storm ends as quickly as it began; the sun bursts through the clouds.

Blood drips from her kukri, though she can’t remember using it. She can’t remember much of what’s happened, only isolated scenes lit by flashes of lightning – horses bolting, men flung to the ground, bushes and tents enveloped in sheets of flame.

She’s close to tears. Weariness is part of it, and the knowledge she has killed, even if she recalls nothing of it. But mostly it’s because she’s still alone. She thought the Lady would appear, to acknowledge her, to forgive her at last. The goddess was there, that much was obvious – the storm, the images in the clouds, the havoc wreaked among the men – but there’s no Lady, only death and a sense of loss.

A groan breaks the echoing stillness. A man struggles to his feet. She doesn’t need to see his face to know who it is.

He whirls round in alarm, drawing a knife. “Do I know you?”

“Once I was called Rinchen, and I gave evidence against you in a foreign land.”

His eyes narrow as he stares at her.

“Before that, I was called Kalpana, and I claimed a golden takin had accused you of theft.”

A flush of anger spreads over his face.

“But before that, I was Girl, and I retrieved the temple gold you planned to steal.”

He steps back, as if she’s struck him, and for several seconds he can’t speak. Then he looks at the kukri in her hand. “What’s this, some kind of revenge?”

“I’m the person who pronounced judgement on you.”

The rage returns. “I should have killed you back in the village.”

He rushes towards her, knife raised. But the kukri catches the knife, twists it from his grasp, and buries itself in his throat. For a long moment he hangs there, impaled on the blade in a torrent of blood, eyes glaring hatred, hands vainly reaching for her neck, then he falls to the ground.

She’s feared him for so many years, imagined his death so many times. She thought she’d be pleased, triumphant, yet she feels only sorrow at the way evil always breeds more evil, at the waste of so many lives, including his own. She drops to her knees beside him.

“Forgiveness?” comes a voice. “You think he deserves it?”

And the goddess is there. Not as the lovely figure of the Acolytes’ Shrine, but in the form of the monastery’s great statue in its incarnation of Justice, with its terrifying mask and bloodied armour, five hands wielding a kukri, the sixth brandishing the severed head of the buffalo demon. A figure of nightmares for a six year old child.

But she’s not a child any more. She stands, head erect, meeting the goddess’s cool gaze. “It’s not a question of his deserving it, but of my pity, freely given. And perhaps he trod the path towards evil because no one ever cared enough for him to set his feet on a better road.”

She’s suddenly aware the goddess’s eyes aren’t red and burning with bloodlust as her childhood imagination decreed, but are gentle, even sad. As a child she’d been unable to see beyond the statue’s trappings of battle, beyond her own terror, but now she realises that behind the mask is – has always been, as Sukhbir said – the true face of the Lady.

The six-armed statue disappears and the Lady of the shrine is there, shimmering in light, ever lovely, ever loving, ever beloved. “You had to ask me to remember you?” A smile dances on her lips. “You think I might have forgotten? No, I remember everything, including all the names you have borne. Girl and little mouse and little one and Liar. Kalpana, my imagining, and Rinchen, my treasure. Even No One, the nameless woman of your wanderings. But your true name is – has always been – Dorje. My thunderbolt, my diamond. The indestructible weapon I have forged to bring justice to this land.

“Did you think I would let you go so easily? You are mine, Dorje. You have always been mine. And I am with you.”

The Lady holds out her hand.  “Come. The river of Justice flows again, but we still have a long, hard road before us. Let us get started.”

A long, hard road, and she has only her kukri and her faith. But the Lady is with her. They will be enough.