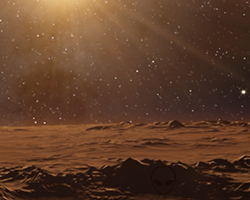 Manoeuvre thrusters start up to turn Talfryn’s spacecraft back. He hasn’t touched his nav controls or pre-programmed the autopilot to return to Oberon. This is a hacking job. Panic hits him.

He switches to the backup nav to reverse the course change.

That kind of override means an arrest worm. The moon’s police will be waiting to take him into custody for a murder he did not commit. Yes, the moon’s auto-surveillance system recorded somebody with all his personal traits knifing Bernice Deutsch, but he was asleep in his condo at the other side of the Othello crater and had no alibi, not even CCTV.

Left with no other choice, he checks for nearby landing sites for his life-pod. The Frankenstein moon, Miranda, is within reach if he leaves now. He’ll call his twin sister to retrieve him once he’s landed.

He dashes to strap himself into the pod, seal the door and hit the release button. The thrust pushes him into his seat to clear his spacecraft, and then he’s in free fall with only the straps restraining him.

He switches off the pod’s emergency locator beacon and other transponders to go dark. These are all the signs of an expensive way of committing suicide. Let the police think that.

The lights go off to save power, leaving Uranus’s blue-green hue flooding in through the portholes. He checks out the stars he can see. To his right, those four are the pan of the constellation, Ursa Major. He measures the distance from the star at the panhandle to the pan’s opposite one. He continues along the diagonal for five times the distance to a spot in the pod’s wall. Behind it will be Castor, a star in Gemini, and currently also close to that direction, Miranda.

Talfryn turns the cogwheels on his console to pivot the pod round, thankful that some genius had insisted on chemo-mechanical nav controls to prevent space radiation interfering with any electrical signals. The pod’s steering controls cannot be hacked.

Miranda’s small disk with its characteristic chevron contours of cliffs’ edges comes into view and continues moving until it lies straight ahead. He powers the main thruster towards it for a minute and then climbs into the stowed emergency spacesuit. It will add a little more protection against space’s harmful rays. He straps himself back into his seat and relief slightly relaxes his taut muscles.

Damn it! He sits up straight. He has made a horrible mistake. As a surface drift miner, he should have known better. Miranda has no caves to shelter in from space’s radiation. This is why the moon was never colonised. Options?

Stay in a crater’s shadow to reduce the dosage. It would not by anything like enough. His body would fry more slowly, certainly before his sister could collect him. But it will buy him some time. To do what exactly?

His only chance is to switch on the emergency beacon, be rescued by the police and come up with a defence for his trial. That is a joke. He’s tried every other angle he could think of already, even weird ones like mass hypnosis or someone inventing the perfect holographic illusion. Nobody bought any of his explanations. No proof. That is why he fled in the first place. Extra brain sweat is unlikely to add any new insight.

When all choices look like leading nowhere, he has to take the one that offers the most hope no matter how small. Police rescue from Miranda at the last possible moment it is.

He settles back in his seat and closes his eyes to work out, yet again, what his best defence in court would be.

Beeps warning of collision interrupt his thoughts. He checks through the portholes; ahead Miranda’s icy greys loom large. To one side a crater’s overhang lies in shadow from the planetary light. He adjusts the cogwheels to head there.

As the pod swings round to land upright and passes into the gloom, he spots a darker patch in the crater’s wall. Maybe it’s a niche to tuck into. Or it could be a buried meteorite, which absorbs light and perhaps other radiation. Either way, it will help a little. Better than he had hoped. He steers his pod to land nearby.

He shines a pod light onto the patch. It is no niche, but a glinting crystalline black ore: moissanite, an ore he would normally mine for its abrasive quality.

Some glints merge to outline the shape of Darth Vader, someone he hasn’t seen since his childhood vid-watching. The last few days’ strain must have released his demon imagination. He laughs to chase it away. But when he looks back at the ore, the ghost of Vader is still there.

Dumbstruck, he stares at the illusion. He dredges up facts about moissanite: silicon carbide is its chemical name; a semi-conductor; can be made into diamond-like gems; and can generate single light particles, photons, on demand. The last point echoes in his mind. Photons must be continually being generated to produce the ghost he’s seeing. If it can happen here, in nature, someone, somewhere can manufacture and control it. And if the fine-tuning of control is good enough, they could make a ninja outfit to wear and look like anybody, even him.

When the impossible has been eliminated, whatever remains, however improbable, must be the truth.

A person, smaller than him, must have worn this programmable suit to murder Deutsch and frame him. What else can he deduce about the killer? Very tech savvy, has access to surveillance records, and has a deep enough grudge against him to take the time to program for the murder.

Very few people on Oberon would fit this description. So few, in fact, the police could identify them through data sifting and have the capacity to investigate their whereabouts at the time of the murder.

Talfryn has his defence, certainly enough to give the judges reasonable doubt about convicting him. He cries, shakes with relief, and suddenly feels very tired. Sleep, which has eluded him for so long calls. There are two things he must do first. He switches on his emergency beacon and takes time-stamped pictures of Vader.

The oblivion of deep sleep claims him.