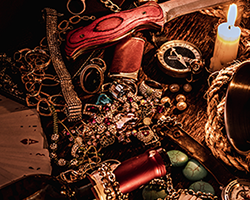 As the echoes of the Storyteller’s call faded, excited laughter filled the air. Children rushed towards Akiowa, long-legged boys whooping as they ran, girls holding hands, toddlers waddling behind. Joy streamed from every child.

No. Not every child.

“Welcome, Storyteller!” called the headman. He led Akiowa to his home, gave her honeyed water to drink, and once the villagers had settled, the Storytelling began. And through it all, Akiowa wondered about the girl and the look of hatred on her face.

Eyes closed, head resting on a mossy root, arms wrapped about the spear, Akiowa sighed. The spear had rejected the comfort of the headman’s home with its new-woven sleeping mat, and had brought her into the woods to sleep. But sleep wouldn’t come.

All wasn’t well in the village. She’d sensed that as they’d gathered for the Storytelling – the squabbles, the sidelong looks – and the silence at the end confirmed it. Silence always followed a tale, as the spear’s magic still held everyone for a moment before the clamour of applause and calls for more. But the silence after her final story had been uneasy, brooding, lasting too long.

Later, as they ate, the headman had whispered the explanation. “That last story, the old tale of The Crow-Thief, that cut close to the bone. We’ve a thief in the village. Small things, but not a home has been spared. A thief, Storyteller!”

Akiowa understood his horror. A village could overcome threats from outside – floods, wolves, crop failure – since they’d unite against danger. But a threat from inside, with everyone suspicious of his neighbour, that could destroy them.

An unhappy village. And most unhappy of all, one awkward, stumbling girl. A girl Akiowa had to save.

“I saved another girl once, spear,” she murmured. She would have said more – would have told the whole story of Ahote of the troubled eyes and broken nose, a girl fleeing tribeless men and slavers – but the spear sent its thrill up her arm, warning her into silence.

Akiowa lay still, unafraid, knowing the spear would protect her. Knowing, too, it was no animal she heard stealthily advancing over the woodland floor.

Closer came footsteps. Closer, closer. Then a shiver of movement among the spear’s charms by her head, the faintest jingle of moonmilk stones against blush-coloured shells.

Her eyes remained shut but she knew who was there. “That clumsy girl,” the headman had grumbled after the child had dropped a jug of water, smashing it. A strange, sullen, motherless child incapable of doing anything right. So he thought.

Akiowa waited for the girl to move away, then followed silently behind, threading her way between the trees. At length the girl knelt by a woodrat’s old nest in the roots of an oak and drew out a cloth bundle, which she opened. Trinkets glittered in the moonlight – rings, beadwork, turquoise amulets, polished stones, arrowheads, even fish-hooks. Delicately, she added a rose-coloured spiral shell to the collection.

“So this is where you hide everything,” said Akiowa.

The girl started, leapt up, lost her balance, fell. Slumped against the oak, she stared wide-eyed at Akiowa.

Akiowa sat, picked up the shell talisman and reattached it to the spear. “I understand. No one values you, so you steal what they do value. They hurt you with their laughter, so you hurt them. You requested The Crow-Thief to taunt them. No one suspects because how could a clumsy, stumbling child be so stealthy and nimble-fingered?  Do you trip and drop things on purpose?”

“No!” Indignation in her voice, then aching despair. “But they watch me, hoping I’ll fall, and make fun of me, and I can’t control my hands and legs.”

“And when you steal?”

“I’m not me then. I make myself be the crow-thief. He never falls.” She caressed the stolen trinkets. “What will you do?”

“… So the little woodrat, though lame and weak and despised by the other animals, saved them all. ‘Let that be a lesson to you,’ said Owl. ‘The smallest among you is valuable, and all must be valued and respected if you wish to be happy.’  So ends this story.”

Silence. Thoughtful silence, with guilt-filled glances at Fala. The plan was working. Fala had called for the new-minted stories Akiowa had named – The Broken-Winged Titmouse and The Despised Woodrat – and the spear had spun its wonderful tales. Now for the rest of it.

Akiowa drew the spear from the ground. “So ends this Storytelling. But I have one tale more. Last night in the woods I spoke with tree and lichen, fox and woodchuck. And I spoke with crow, and found something.”

She pointed. “You, child. Your name?”

“Fifty paces past that old hickory, Fala, there are hawberry trees. I left something there. I need someone who is careful to bring it to me without letting it fall.”

Fala straightened, taking the crow-thief’s confidence into herself. “Yes. I can.”

She set off towards the hickory. A dozen children and several adults followed. Shortly after, the children came running back.

“The Storyteller’s found the stolen things,” called a boy.

“In a huge crow’s nest,” yelled another. “A crow stole everything!”

“The crow will steal no more,” said Akiowa as Fala reappeared, walking confidently, the nest in her arms.

“She hasn’t once tripped, nor dropped anything,” reported a woman with mixed awe and disbelief.

At Akiowa’s gesture, Fala passed the nest of trinkets to the headman. He stared, as though seeing her for the first time. “Thank you, Fala. You … you did well.”

“She did,” said Akiowa. “Fala, take this.” She detached the spiral shell talisman from the spear and gave it to Fala. “With the Storyteller’s thanks and respect.”

Delight shone on the girl’s face. The villagers heard, saw, understood. Akiowa knew they would heed the stories’ lessons.

She’d brought happiness. For one girl, one village. But her journey would continue.