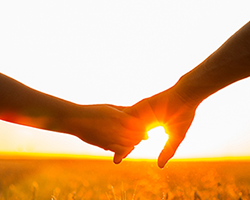 “… and so despite all the hardships and the tricks of the envious, the Starlight Weaver and the White Moon Hunter joined hands at the first sunset of the beginning time. And ever after they have lit the night sky, for they wish us to remember their love and happiness, and to love and be happy ourselves. So ends this story.”

Elation filled Akiowa. The conclusion of each of the ten very different stories she’d told the villagers had brought a glorious sense of fulfillment, though the telling of them was the spear’s work, not her own. But the tales of the Starlight Weaver had always been her favourite, told and retold by her mother and aunts, however imperfectly without the spear. And this particular story spoke to her now as never before.

Love was the answer to her searching. To find love was to find happiness.

But hard on the heels of elation came fatigue, for never had the spear crammed her mind and mouth with so many stories, one after the other. Yet the villagers were already calling out with more tales they wanted telling. She would have to continue.

The spear clearly disagreed, for it moved in her hand, pulling itself from the ground. “So ends this Storytelling,” it said through her. “For now,” she added, since the children sitting close by huffed and moaned with disappointment.

Everyone stood. The headman’s wife shooed the children away as the adults went back to their work, then she turned to Akiowa. “Our home is yours, Storyteller. Rest now, while I prepare our meal.”

“She’ll come with me and talk of the old times first,” came an aged but commanding voice. An old woman approached them, one bony hand clamped on a boy’s shoulder. Her eyes were clouded, as white as moonmilk stones.

The headman’s wife gave a small bitter smile. “Your word, as ever, is law, Nokomis.”

“Not since my man was fool enough to get himself killed.” The old woman pushed the boy away. “Walk towards Murako’s home so the Storyteller knows where we’re heading, then go about your chores. Give me your arm, Storyteller. We’ll sit with my granddaughter and her man.”

Though tired and puzzled – and more than a little disgruntled at having no say in the matter – Akiowa set off after the boy, Nokomis gripping her arm. When the old woman spoke again, her voice was low. “The old Storyteller found someone to take her place, then.”

Akiowa almost stumbled, only the spear holding her up. “How …?”

“I’ve lost the use of my eyes, child, not my wits. Everyone sees an old woman. I hear a young one.”

“Knew enough. I wanted her help. But you’ll have to do.”

“My granddaughter, Namid. A story to make her see clearly, perhaps. Or make Murako, her brute of a husband, stop wallowing in self-pity.”

Namid was a woman of middle years, but in her fluttering shyness seemed far younger to Akiowa, younger even than Akiowa herself.

“I was thrilled, Storyteller,” she babbled. “You choosing my story. Our story, I should say.” She gazed at her husband with naked adoration. Akiowa shuddered to look at him, at the terrible scars clawed across his ruined face, the empty eye sockets. A bear attack, Nokomis had said.

“The Starlight Weaver’s tale,” Namid continued, “the hardships and envy, that was also mine and Murako’s.” Her hand reached to his. He slapped it away.

Her hand trembled for a moment; her lips quivered in distress. Then she bent back to her work, making a sleeping mat from long tule-rush stalks with quick, deft movements, twisting and twining the dogbane cordage, binding the stalks together.

“You have magic in your fingers,” said Akiowa, in genuine admiration.

Nokomis nodded. “She’s the best mat-weaver the village has ever known.”

“She’s good for that, at least,” said Murako.

Namid bit her lip; Nokomis’s jaw tightened. Akiowa clutched the spear, sipped at her drink of birch and maple sap, and wondered how she could help anyone.

“Storyteller,” said Namid after a painful silence, “I have to fetch more water, to keep the tule stalks damp. Will you stay and …” She faltered.

“And watch over the old and useless,” finished Murako sourly. “Just go, woman.”

“Treated like a babe,” said Murako. “The village’s best hunter once. Never alone. Other hunters always around, boys wanting to learn. Now useless and unwanted.”

“Namid wants you,” said Akiowa. “She loves you dearly.” He gave a snort of derision. “And you don’t have to be useless,” she added.

“A hunter who can’t hunt is useless.”

“The village needs other skills.”

“Then find something else. Help Namid weave the tule-rush mats.”

“Do women’s work? The bear should have killed me.”

Akiowa talked to him, argued with him, made suggestions, gave ideas. He rejected everything. “I thought to pity you, because you were blind,” she said at length, with some heat. “Now I see the blindness is in your heart, not your eyes.”

“Let him fend for himself more,” repeated Akiowa. Having failed with Murako, she’d followed Namid to the lake, but was having no more success. “Make him do things.”

“No, Storyteller. He needs me. You don’t understand how we love each other.”

No, thought Akiowa as they returned to Namid’s birchbark home. I don’t understand how love enfeebles on one side and reacts with cruelty and anger on the other.

She didn’t sit with them again but walked with Nokomis back through the village.

“No matter, child. They’re not ready to hear sense. You can’t easily open a door-flap if those inside the house have fastened it shut.”

Yet Nokomis had thought the old Storyteller might have opened the door. What would she have done? Did the spear know? Akiowa felt sure it did, and was waiting for her to understand.

After the meal and further Storytelling, Akiowa sat with the villagers as they chattered, but her mind was elsewhere, brooding on failure and frustration. She’d been so sure love would bring happiness, but love alone wasn’t enough.

In the morning she and the spear would leave the village. Her search for happiness would continue.