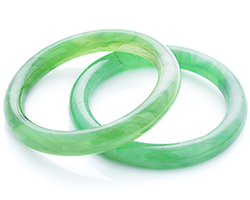 As the clock struck midnight, Feng-jing shifted in his chair. He was having a small snack, just a bite of sticky rice cake, when the wooden chair lifted up and he soared out the window. His sweater sleeve snagged on a branch, but he barely felt the rip. He dropped his half-eaten cake. “Hey,” he heard from below, as the pastry hit the helmet of a motorcyclist. His heart palpitated as the breeze whipped his black locks.

“Dad!” he yelled. No response.

The chair dodged Taipei’s various glowing signs and street lamps. As Feng-jing passed above lanterns held by a single string at the temple front, he remembered that thin thread of bracelet on the fortune teller’s wrist. Years ago, Mom took him to the night market, like she did every Friday. She had her fortune read and, on that day, made him do it too. She ushered him into the crammed booth. All he wanted was a scallion pancake, but as he looked at the fortune teller’s gaunt face, he shivered and forgot about that flaky treat. He wrote his name for her, at her request, in his messy elementary scrawl: 馮敬 Feng-jing. The fortune teller stared at it, her lips unmoving.

She looked at him with luminous eyes, “Twelve/twelve,” she said finally, tracing the strokes, counting them aloud. “Your twelfth year, when the hours are even – twelve/twelve – you will realize what you long suspected.”

He had no idea what she was talking about. But those eyes stayed with him. They quivered, a strange expression of unease crossing her face. Even the scallion pancake didn’t taste quite as savory that night.

He realized now. He could see this fortune teller as he flew, the strange expression of her eyes mapped out in the twin hazy, dark clouds above. These knowing clouds seemed to recede once he acknowledged their existence. When they left, they unveiled the moon, like a stage curtain pulled back by a phantom hand. The moon was bright, fiery with light. It was the autumn equinox, sixteenth solar term of the lunar calendar. He was twelve. Today, sunlight would stretch as long as the night. Twelve/twelve hours.

The mid-autumn festival was coming – the moon celebrated the approaching festivities with opulence, just a wedge short of a complete luminous circle.

Feng-jing stretched out his dangling legs; he felt like he could almost touch the moon with his slippered feet.

The chair sped up. For a while, he could think of nothing but the wind smacking his face with unbreathable, raging velocity. He circled his arms, trying to create his own cyclone to counter its force. All it did was make his triceps ache.

The chair slowed. The moonlight exposed the wispy grass dancing in the gusts below his feet. The land rose up. His chair lurched, following the land’s ascent. He gasped. He was going to the top of the Yangmingshan mountains.

At the apex, the chair skidded to a stop, its four wooden legs hitting dirt. Feng-jing fell off.

This is where Mom took you before she left you. His mind wandered. She had taken him on a stroll, but she had wandered away. Or maybe it was him that wandered away. It was a beautiful spring day, and she wore her typical perfume that blended with the fragrance of the breeze. He was admiring cherry blossoms, and then his hand was cold and she was gone. It had already been over a year, but he could still remember the sound of her two jade bangles clinking together, and then that periodic clinking was gone, replaced by rustling grass and the chatter of tourists.

He didn’t know why he was here in this hushed place in the dead of the night, but he walked as if possessed, his toes digging into soft grass. He walked and walked until he came upon heat rumbling from the earth and the sound of water. Before him was a hot spring, its surface rippling, cutting up the light of the moon. The movement of the water must have been air bubbles from deep below, but to Feng-jing it looked like a pulse, carrying an abstruse message. He counted twelve ripples. In an inspired jolt, he tore off his clothes and stepped in.

The water heated him – warm, comforting. Perfect for a breezy autumn night.

He tilted his head back, resting it against the rock, watching the steam rise, when he heard clink-clink. Stalagmites, reaching out of the waters? No, not stalagmites. A mane of red flanked by two horns, cuffed by two rings of jade each. The rings would occasionally meet and give each other a toast, as if congratulating themselves. A face peered from underneath. First it was just the hint of eyebrows, but then the eyes and nose emerged, and it carried the aloof, indifferent expression of his mother – so familiar that he started and choked on warm water.

Her hot breath tickled his skin as she pulled him in, her tail wrapping him up. An embrace. The roughness of scales at his ribs.

A second sound, hooves trotting through grass. More clinking, but this one light and metallic, like gold. Another qilin had come, one with dark blue scales, letting out a high-pitched roar. Feng-jing sensed this qilin was female, from her regal gait and warbling voice. The one that hugged Feng-jing let go, backed up onto land and intertwined necks with the other. They ran off. Feng-jing called out, but his voice was too hoarse, his eyes too wet to see where they had gone.

It was only when he stopped crying that he noticed a set of jade bracelets on his wrists, each with six visible bands of emerald green. Twelve bands, he counted, the hot water lapping at his chest. He stacked them, holding them up high to the light. The circumference fitted the moon’s perimeter exactly, as lunar light filtered through the hole and offered him a sense of peace.