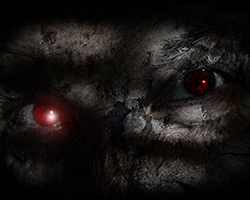 I hold the memory of him in my mind, gentle as a paper swan, so I don’t forget the details. The rosy red of his cheeks; the way looking at him was like looking in a living mirror. The way we’d play hide and seek, and the shrillness of my voice as I called after him. How he could never stay hidden for long. Will, Will, Will, I call into the darkness, as if it could bring him back. As if he is only hiding, as if this is only pretend.

You’re twins, aren’t you? the kindly man in the market had said, crouching down to get a better look at us, his glasses glinting in the sun. Yes, I replied, puffing out my chest, but I’m older. The man smiled, escorting us to a bus filled with other children, identical twins just like us, and the bus took us away, far enough that the air was thick with fog and the mountains hunched over everything. Will was afraid, but I was confident life would be better here, amongst the jagged rocks and the crashing waves. No more begging for scraps and stealing and sleeping under newspaper. I promise, I said, offering my hand to him so we could do our special secret handshake. I won’t let anything happen to you.

Now I am a monster, and Will is not here.

Just a little prick. You’ll hardly feel it, the doctors in our new home had said as they held their syringes to our arms, over and over. Sometimes the fluid was clear, sometimes an almost cheery colour, red or blue or even deep violet. The syringes did nothing to me, but each time it made Will sick as a dog—so sick they took him away from me, leaving me to stew in my own worry. What were they doing do him? Why did I feel nothing?

Until suddenly I did.

It was like opening my eyes to a new dimension, seeing a new colour, hearing a new musical note. The bars on my cell and the doors could not contain me—metal and flesh were ripped to shreds as I tore my way out, searching for Will. But I became lost, disoriented in the mountain fog, thick pine trunks identical each way I looked. I burrowed into the earth and now I lie here, shivering in the dark, my mind slowly slipping away from me.

I close my eyes. I imagine I’m soaring high in the sky, so high the mountains and the sea disappear, the world a tiny speck below. I feel powerful and angry, like I could curl around the moon and tear great chunks out of it until it falls apart. I dream of the sky falling and the sea rising up and swallowing the world whole.

I dream of Will’s face, pale in the moonlight, hear the last words he whispered to me: They’re taking me to the basement, Jack. Nobody ever comes out. You have to help me.

In dreams as in reality, I can only watch as they pull Will away and I cannot move, cannot breathe, cannot do a single thing to stop it.

I wake with stiff limbs and a fuzzy head. I see my body in the dim light and don’t recognise myself: dark veins snake under scaled skin, steps stumble as I adjust to my hobbled feet. My fingers end in hooked claws, still stained rust-red from blood.

Will, is all I can think. I must find Will.

My legs are uncooperative, but I claw my way out of the dark hole, emerging in the milky mountain mists. When I take a breath, the smell of the air nearly knocks me over. It’s like reading a map as trails of energy criss-cross over my senses. Mice, rabbits, a solitary starving wolf: each tempting in its own way, especially as my stomach growls with hunger. But then I catch something else. Stronger, darker, leading into a thicket of pines.

It’s dark when I approach. The fear is palpable in the air now, the gates to the compound locked. Nervous guards shine their torches into the forest. Orders are barked, followed by a flurry of gunfire. I roar, the bullets bouncing from my scales, and soon enough the guns are silent.

My hunger is sated and warm blood drips from my mouth.

The gate is a huge thing, twelve feet tall and made of reinforced steel, but it was no match for me when I escaped and puts up even less of a fight this time. I peel open the steel door of the hospital. More screams, more terror, more gunfire. Then silence. My vision is blurred and my senses overwhelmed, so I close my eyes and follow my nose instead. The basement. I sense him somewhere nearby. I must be close.

There are so many rooms down here that I barely register the details: stainless steel glimmering under harsh lights, the glint of sharp-edged scalpels. More people try to fight me; others in white coats scream and run. This time the bullets bite, tearing chunks from my scales, but not enough to slow me. I move through them all like a reaper, thinking only of Will’s terror as they dragged him out of our room. I reach a staircase.

I descend a floor at a time, cracks forming on the tiles as I leap from level to level. Finally, I reach another locked door. I hold up a hand to tear through the steel like tinfoil. My thoughts are scattered, my movements clumsy. Will, Will, are you here? Can you see me? I came back, like I promised. I came for you! The room is pitch black. Small, too, only a few metres square, and at its centre a deep, dark pit…

No, is all I think. But there is nowhere else to go, and I can hear the pounding footsteps of my pursuers.

My nostrils fill with the stench of death.

I lean over the pit to scan the faces of the dead, but I know I will never be able to find him. There are too many, and they all look the same: pale corpses with lips shrunk back, grimacing in death. My vision turns white, then black, rage and grief filling me like a superheated gas.

I turn to face the gunfire and close my eyes, thinking only of Will.