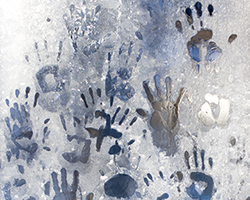 When was your first? That is always what we ask one another. When and what? When in your life was that moment, the time that revealed the world to you and sent you scurrying under the bed sheets? When I think back, the thing I always remember is the house. Not the inside, where the shadows gathered and hid. Those memories came later. I remember the front, the black and white Tudor facade with roses growing around the door, and the crunch of a gravel driveway under car tyres. God only knows how my father afforded such a place, although I suspect the Devil might have a better idea. Not a grand house, but beautiful and caught in my memory in a moment of eternal summer. Memory can be an ironic little bastard when it wants to be.

We moved there when I was about eight. I don’t remember much before that, which is odd as eight is old enough. I know some people who claim to have memories of their time as babies, of flashes of food upon their tongue, the smile of a mother’s face. I don’t have any of that. Mother never really smiled much in any case; she never seemed up to the challenge. Father laughed all the time, a laugh which echoed around that house and bounced from basement to rafter. The days there were full of laughter, though I didn’t join in.

My room overlooked the garden, such as it was, fenced in on all sides by the encroaching houses of modernity. I liked to watch the moon shining on that small patch of grass. But soon I couldn’t see out the window. There were too many handprints on it. Father got very angry about those. He said I was being naughty, that I shouldn’t make such a mess, and didn’t I know how much it cost to clean windows? Then he would laugh and raise his fist. I said nothing, through the tears. I hadn’t touched the glass. The hands had just appeared.

More things began to climb their way out of the rich oak panelling. I would lie in bed and feel the trickle of cold running down my spine as a finger traced the curve of my back. Shadows flickered in the corners of the room, never there long enough for me to see what cast them. I could see them, and they could see me. They seemed to be waiting for something. But they weren’t hurting me and that meant I could wait to be afraid. Mother saw them too. She would be sitting on my bed, reading to me, when her gaze would dart away from the page, following the movements of shadows that should not be moving. She would stop reading altogether and hold me close to her, though whether to protect me or comfort her I don’t know. Sometimes she spoke to them. Sometimes she spoke to me. I don’t remember what she said. I just remember the fear that radiated from her, a clammy chill that clung to the skin. Then from downstairs came the sound of the door closing, followed by my father’s laughter. His slurred shouts for her sounded through the house. The shadows grew deeper. And she would go to him, holding out her fingers to me as she went, a ship drifting away from its harbour. Those were the nights I dived under the blankets. Worse were the ones when she returned, accompanied by my father. And she would watch as he stumbled into my room. She said to me that those things we saw in the house were evil spirits. But I knew all the evil spirits were locked in a glass cabinet in father’s study.

We had one small room that my mother liked to think of as the library. Really, it was little more than a cupboard, but mother had always enjoyed books, or at least she enjoyed owning them. So they had put up shelves inside and turned what had once been a disused space into their own walk-in library. The shadows liked it there. Here they gathered and swirled, a presence that left you feeling like a cold fog had rested on your heart each time you went past. Father avoided it whenever possible. He said he got the “heebie-jeebies” up there on his own. I stayed there a lot. The shadows tried to push me away. One time I saw a girl. She stepped out from behind a shelf nailed to the wall and looked at me with eyes made of glass. It made my blood turn to ice, and I felt the damp shame as I wet myself. But I didn’t leave. Father was laughing in the hall outside. After a while, the girl blinked. We played tic-tac-toe together that evening.

There were other things that existed in the house, hiding in the rafters and under the beds. As we grow up, we learn all sorts of names for them. We seem driven to try and understand and classify those things which truly defy all classification. Back then, though, they were all just the shadows. They could be terrible, their forms and features drawn from nightmares. There were nights when dark wings gathered about my head, when eyes glinted in the corners of the room and voices whispered on the edge of hearing. My mother couldn’t bear it in the end. She left. I remember sitting in the little library cupboard, reading to the shadows, while down below glass shattered and parents shouted. I heard her screams, cut off at last when a door slammed. My father didn’t laugh that night. His evil spirits took him past laughter, down into the sunken sleep I always prayed for.

Not long after, there came a day when the laughter got too much. I had come in from school, the last day of term, and climbed the stairs as quietly as I could, heading for my room. I found him standing there, staring at the door to my little library. The bottle in his hand was empty. I wandered why he was still carrying it. He looked at me and he laughed his jolly laugh that danced around the hall, born up by the smell of whisky. He came over to where I stood by the banister. Below, I could see the cold tiled floor of the hallway, its patterns like that of a chessboard wiped clean of its pieces. The queen was gone, the king remained. He knelt and looked out at me from behind a toothy smile.

“You look so much like your mother,” he said. His hand shifted on the neck of his whisky bottle, grabbing it like the handle of a knife.

A shadowed fog settled upon me. My breath frosted in the cold air. I couldn’t tell if my father felt it. It was difficult to know if anything made it through his comforting glow of alcohol. Then my friend stood beside me, her glass eyes shining with the light of a moon not yet risen. His arm flung back and the bottle slipped from his fingers. I remember it hanging in the air for an eternal second, empty glass spinning end over end, before shattering on the hallway floor. Crystal shards sparkled black and white. She reached out and held my hand. It felt like holding a dead fish, all clammy and cold. I gripped that hand as hard as I could. The glass-eyed girl never blinked. She held my father in her eyes. He fell back, away from her. I could see the shadows gather around him, all those whispered words in the night, the shining teeth and gibbering faces that had tried to worm their way into my mind but found it too full of him.

In the end, he tried to flee. He turned and flung himself down those stairs, a toppled man. I heard a sick snapping as he reached the tiled floor, but he still managed to drag himself across the chequered surface. The door closed softly behind him. My friend stayed with me that night, the two of us curled up together, surrounded by the books.

I didn’t see my father again. The important thing about the king is that he seems all important. The entire game comes to revolve around him. But in the end, there is no more worthless a piece on the board. When I think back, I remember that bright house with its wreath of roses. I remember it as it was on the day social services drove me away.