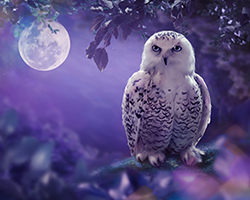 I can hear it. About twenty metres up ahead, somewhere high in the trees. That caw. I renew my glamour hex to blend in with the thicket of the woods and slowly walk in its direction. I can feel that it’s close.

A sound. Not its cry, but the groan of a passing truck not far from here. The road that splits the forest is about half a kilometre to the west. The vehicle passes and the silence returns. Now I wait for it to cry out again, hoping it’ll betray its location.

The leaves have turned to their autumn brown. It’ll stand out more in this ocean of earthy colours. If I don’t shoot it now, it will vanish in the snow that will fall soon. This might be my only chance.

A glimmer from between the leaves. I pick it up. A gold nugget. Two more up ahead. It’s collecting nesting material. There! A flash of white. I peer through my scope and aim. Was it my imagination? No, that must have been it. I listen for the sounds of wings or creaking branches should it perch. I can feel my hex losing its strength. Damn it all, where is it?

Then, about twenty metres to my left, it lands on a thick branch. Bubo scandiacus grypus: a male snow owl gryphon, with wings as white as clouds, broken only by its three rows of dark spots. The Gilded Eye Review reported on the White Ghost for weeks. It had been spotted flying through the forest by local gold-grabbers and amateur avian-watchers. So far south, away from the arctic circles – it’s astonishing.

Now to get into position and do what I’d come here to do: shoot the White Ghost.

It moves frequently, rubbing its wings against its beak while digging its panther hind claws into the bark of the tree. No good. Too much motion. I wait patiently for just the right shot. It ruffles its feathers while its tail poofs up. I feel my hex dissipating, revealing my position. Clutched in its claws are gold nuggets that it has collected, stuffing them away among its feathers. Almost got it.

There! It stops, sitting straight to look out at the forest.

I press down the shutter release button. The camera snaps, startling the White Ghost. It looks in my direction, flapping its wings. Shit! I hastily take another shot. Before I can refocus, it’s already taken flight into the sea of trees. Magnificent.

I check my camera, feeling pretty damn proud of getting the shot. Or so I think before I notice a slight motion blur. Damn! So close. The second isn’t much better. I’d need to apply correction hexes at the developer, disqualifying them from publication. I missed my chance.

To hell with that. I won’t give up. Not while the White Ghost is still within my reach.

“Rapido,” I whisper, casting it onto my legs as I give chase. With a performance-enhancing chant in use, I’m unable to camouflage myself without causing cross-magic burns, but speed now trumps stealth.

I hear it screech while its heavy wings flap away. Westward. With wolf-like speed, I catch up quickly. It tries to lose me by casting a wind spell of its own. It’s fast, but my spell makes me just as swift as I race after it to get that perfect shot. My head’s so wrapped up in the chase that I neglect to notice where we are.

I hear the truck. Nearly tripping myself, I come to a halt. The road! But the Ghost doesn’t stop. It dives out from the trees and into the open. A blow horn roars.

“Clypeus!” I shout out instinctively. A blue glow encases the gryphon.

A thud, like a brick hitting metal. My heart stops. The truck is long gone by the time I take my first breath again. Gold coins scatter across the road. Several down feathers flutter in the truck’s wake.

What have I done?

A screech comes from across the road. I turn and meet a set of golden eyes. For a while, I am unable to process what I’m looking at. It’s only when the White Ghost digs its front talons into the bark of the tree and climbs up into it that I finally calm down. It’s alive. Its left wing seems scuffed, but other than that, it’s okay.

Then I notice the pain in my left arm. Sparks shoot from my skin as it cracks. In my quick reflex, I had cast a shield without disabling my leg enhancement.

“Owowow!” I hiss under my breath as I disable all hexes. Despite the pain, I manage to stop the cross burn. I rest against a tree, nursing my wound. Brilliant. In my greed for a good shot, I got both of us injured. That’ll teach me.

Then again, it is still there. What possesses me, I don’t know, but I take my camera and aim it at the gryphon. I wait for it to finish plucking broken feathers from its wing while I refocus my camera. Its eyes fall back on me, and I’m about to press the shutter release when I stop myself. Earlier, it had looked majestic. The White Ghost of the forest that lived in peace. Now it’s hunched over, more fragile with its bruised wing and dented feathers. Its eyes have gone from wild confidence to a fragile hesitation, ready to leap off and try its luck in the air just to evade its pursuer: me.

My camera lowers, and I simply look at the snow owl gryphon. It takes a while before it can get comfortable enough to take its eyes off me and tend to its injury. I try to imagine the travels it must’ve endured to come so far south. Braving storms, the seas, and the wyverns that prey on them, only to nearly be killed by a kid with a camera and a DAF truck.

“Folio,” I whisper, activating my camouflage hex. The gryphon takes no notice of my disappearance. It’s not much, but leaving without a good photo will have to do as my penance.

I’m sure shots from mom’s fairy garden can find a buyer.