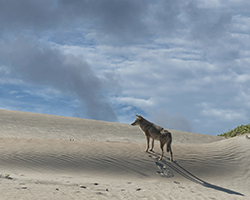 The coastal road between Southport and Ainsdale is edged by sand dunes, covered in long rough grasses that look like hair. Cars rush past at sixty miles an hour, headlights glaring, stereos blaring.

I walk home on the seaward side of the road, traversing the dunes as clocks tick past midnight. It feels like I am walking on the spine of a massive sleeping dog that’s waiting out the years until humanity disappears.

The journey is long, and I’m wearing a short black dress and denim jacket – more suitable for dancing than walking in below-zero temperatures. I really should’ve waited for a cab instead of thinking I could get home on foot. This route was not meant for pedestrians. I blame the wine I drank and the water I didn’t. At least I chose flat shoes over heels.

Aside from the cold, I like walking under this black-gold sky. I get caught up watching the stars instead of where I’m going. I’ve never seen anyone on this side of the coast road before, and I begin to wonder why.

Then the ground starts moving.

I fall over and grassy sand grazes my knees. I stumble upwards, but the earth is still shifting. Seeking escape, I head closer to the sea than the road. Adrenaline shakes through me.

When I look back, I wonder if my imagination’s playing tricks on me. The sand dunes are still moving, transforming into many somethings. A thousand animals, perhaps. Not the giant dog of my imagination but hundreds of smaller beasts. They look like hyenas and stand a metre high. The grasses I walked on just moments before are now transformed into spikes of hair running along their backs. They have cavernous jaws, huge legs, and I am, quite frankly, terrified.

“You!” a voice cries out, and I whirl around. A woman walks out of the darkness, perhaps forty or fifty metres away. She is over two metres tall and wearing a coat of fur or grass or furry grass. I’m not sure that she is human. “This stretch of dunes is mine at night,” she yells, “long agreed by the forefathers of your forefathers. Didn’t you read the signs? Man is forbidden and my beasts do not like strangers.”

I didn’t see any signs, but that would explain why I’d never seen anyone walking here before. I make a mental note – written in caps on the inside of my head – never to come this way again, provided I can get away now.

The woman’s beasts run up and down where the dunes were earlier, and I can’t understand why the drivers still zooming past don’t notice anything. I wave hopelessly in their direction, pleading for help.

“They won’t see you,” she says. “The wards I placed here decades ago keep their focus on the grey stripes. Their gaze washes over my land.”

“This is trespassing,” she accuses. Her voice is like a knife through the wind. For the first time I notice the enormous whip at her side. “It’s a breach of the covenant. You’re making a mockery of your ancestors’ rules. The penalty for breaking them is death.”

“I’ll be gone in a minute,” I promise, as if my words will make any difference to her rage.

She approaches with huge strides, pausing only to crack her whip. The sand-hyenas cry around us – perhaps they fear her, too? They respond nevertheless, all running towards her at once, a net of teeth and obedience coming together as one.

“Your bones will serve as a reminder to the others,” she says.

Of all the ways I thought I might die on this stupid long walk home, this was not one of them. I keep backing away, desperately searching for a plan.

She ignores me and whips the animals, catching thirty or forty of them. They howl with pain yet draw nearer still to their mistress.

The hyenas intrigue me. Have they chosen this destiny? Chosen her? Who would they sympathise with more? Me or their mistress? That’s what this will come down to.

She smiles as I stop still, almost but not quite paralysed by fear. Almost doomed.

I click my fingers and try to coax the smallest of the sand-beasts that I can see to my side. It’s been watching me the whole time.

At first, the runt does nothing but blink from a distance. I grew up with dogs and cats but there’s no way to know whether these hyenas will react the same as the flesh and blood beasts I know. I whistle softly.

Then something in it changes because it rushes over, four limbs pumping hard, and though I think there’s an eighty per cent chance it’s going to bite my leg off, it doesn’t.

I let it lick my fingers, then it sits to let me climb high upon its sandy, hairy back. In the near distance, I see the expression on the lady’s face change into something even tighter and crueller than before, but before she can react, I whisper into the hyena’s ear: “Run”.

The hyena sleeps by my door as I clamber into bed. Simply to rest or protect me, I cannot tell, but its presence is comforting. Sleep comes quickly and is peaceful, wine-induced headache aside.

By morning, there is only a pile of sand where my rescuer lay. I scoop it up very carefully, not wanting to miss a single grain, storing it in a biscuit box. I carry the box to a different stretch of the coast, far away from Southport and Ainsdale, and I hope it will find a better mistress in time, or even learn to be free on its own.

I go by car, and I do it in daylight.

“Thank you, my friend,” I say, pouring the grains out a handful at a time, grateful that the sun is shining.