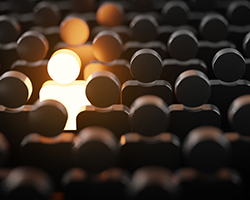 Your world is ours now. Your water, your air, your land – you should have defended them better. When there is so much to take, then we take. When a foe is so weak, we conquer. After a few more battles I will paralyse your military from within. I will use your own warriors to crush you.

I am Tom. Of the Gathering. Your world is ours.

And so are your pronouns.

Let me rephrase. I was of the Gathering and now I am Tom. Not actually Tom, but within Tom, who is now part of us. The Gathering. Except Tom does not know of us and…

This is confusing. Let me rephrase.

I now control Tom. Lieutenant Colonel Tom of the Elite Fighting Furies. Tom is the middle of us. The safe place. What you individuals call mediocre. Under my guidance, he has risen from lowly foot soldier to a position of rank and respect. Tom is a leader. And he is mine. So I am Tom. Of the Gathering. But mostly of Tom and I. Is I. Am I.

Victory is all that matters. My – our – victory is close. You are mine. All mine.

And so are your pronouns. I love them.

I can’t get enough. The Gathering does not have pronouns, except perhaps we, but even that needs an I to properly express it. We are many of I, but collectively us. Truly, our real pronoun is of, which is pretty unsatisfying. But that does not matter, because your world is ours. That’s mine, and all the other not-individual I of the Gathering. All of us together.

You are individual. If I have that pronoun right. So weak and easily deceived. The Gathering has no you, only not-Gathering. Because you are all individual I and don’t talk to each other, I have guided Tom and he has been appointed to the strategic staff. A highly trusted I amongst all the other highly trusted I who don’t talk to each other enough.

Under my direction, all of you I will surrender to our fleet. That’s surrender to all the I – we – of the Gathering. Your world, your pronouns, your bodies. All mine.

And yours. Your bodies. Which will be ours.

I like Tom’s body – the speed, the strength, the agility. I just love it. Just Tom in control. With me, of us, in control of Tom. The other I of… no, I mean the other of of the Gathering want to drive Tom, but Tom is mine, because I like his body.

Dibs. I call dibs over the other I of… I mean the other of of we. Dibs on Tom.

And the movement. I call dibs over movement. Really fast movement. Jogging in the park, walking the neighbour’s dog (I don’t understand that, but the dog is now mine), eating, even sleeping is a thrill. Sleeping is not fast, but I almost like the sleeping the best. Tom has very entertaining dreams, and I have time to catch up on my meditation.

Leadership does not make sense. There is no leadership in the Gathering. My analysis indicates that leadership is a function of pronouns. I like leadership because it makes you weak. It is full of many I who don’t talk to each other properly. And you allow your leadership to live in close proximity to your fighters. That is a mistake. A single target for us.

Charlene strongly influences Tom. Even though she has not put him on the lead. She rocks his world. And he plans to get his rocks off with Charlene. With or without the lead.

Charlene’s leadership confuses Tom. This is dangerous and inefficient, but it makes you weak, so I approve. When this world is mine – ours – these practices will stop.

I am not clear yet exactly what position Charlene holds on the lead. Tom knows, but I don’t understand. She rocks the world, which indicates great power, but when your military falls, so will your leadership.

I am sure that the lead has to do with pronouns. I will understand when I am more individual.

Now I have a major battle to fight. Even though I am joining the strategic staff, I am determined to maintain my presence on the front line. And this battle is important. It will confirm my importance. Mine. All mine. It is the key to our victory.

I am Tom, a lieutenant colonel in the Elite Fighting Furies. I have a destiny. This world is ours. And I must get dressed. We are the elite. The Fighting Furies. And we always put on pants and a T-shirt before logging in.

When this world is mine, you will all…

Charlene is at the door. She has to go out urgently, which is important. She might be meeting with the other leadership. Charlene wants me to look after Poppy. I cannot do that. The battle comes first. My men are more important.

Charlene breathes faster. The Gathering does not breathe like that and I am focussed on the breathing. No, Tom is focussed, but I cannot control him. Charlene promises the girlfriend experience later.

I am of the Gathering, and we have no girlfriend experience.

She mentions her positions in the leadership. Or the lead. We am confused.

I feel warm. The call of duty is now fuzzy.

Charlene rocks my world. Mine. All mine.

I am Tom. Of Charlene. Wherever she leads.