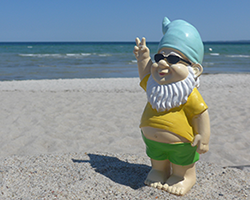 “What was that sound last night and where are all the garden gnomes?” Molly asked Bernard when he dashed into the kitchen.

“Maybe they got fed up of the cats peeing on them and walked off,” he said. “I’m late.”

“Maybe you’ve finally made good on your threat and got rid of them.”

“I’d never do that, dear.” He planted a buttered-toast kiss on her cheek and left her in a flap of half-buttoned clothing.

By the time he reached Southampton he had two missed calls and a wall of text messages from her. Honestly, if the gnomes really had been stolen, fair enough. But who the hell would even want them? Especially the angry-looking one with the fishing rod — when they’d moved down south from Sunderland, he’d even tried to get her to leave that one at the old house. No such luck.

He didn’t bother reading the messages; he’d call her on his lunch break — if he got one, that was. The ships coming in and out the port were a bit more pressing that her cheap garden tat.

The day was its usual slice of hell-on-toast and now the Royal Brunel was heading back to Dublin after an outbreak of legionnaires, he had the added task of late fees and what to do with empty Berth 46.

He allowed himself a brief respite from the demands of the APB, sitting in the temporary refuge of the Vessel Traffic Service’s makeshift Portakabin, eating his cheddar roll. Utter peace: The Itchen emptying into the Solent on his left, the Test flowing past on the right. Sluggish tankers inched along a glittering horizon only to fall off unnoticed as yachts and spinnakers danced on the waves in a white confetti.

He dropped the roll on the nasty melamine dinner plate onto which someone had indelibly reminded plate-thieves, VTS: DO NOT REMOVE! and picked up.

“What about the pictures?” she cried. “The ones I sent this morning. The one of the fence.”

“Darling, it’s been pretty hectic, I’ve not had time. I’ve only just stopped to get something to eat!”

“I’m going to call the police.”

“The gnomes, again…” he slumped, propping his chin in his free hand, “Molly don’t call the—” but she’d hung up.

The flimsy door swung open and a gust of salty air carried the stink of drying seaweed and fuel into the cabin.

“Orright, Bernard?” Chalky said, striding up to him and slapping his back. “Fancy the rest of the day off?”

“Is this because of the Brunel?” he asked.

“Yup. There’s been a sketchy capstan on forty-six for a week now so Site wanna have a look at it while the berth’s free.”

“What about the late fees?”

“You don’t need to be here to chase them, do you?” Chalky patted him on the back, softer this time, and said, “Up to you, mate.”

“Thanks boss, I think I might just do that…”

Half an hour later, Bernard was bombing down the M27 back to Ringwood.

As he pulled into the cul-de-sac he was relieved to see no sign of the police, and Molly was pottering on the front lawn with a mess of weeds in one hand and a brace of blue moon roses in the other.

She wasn’t really listening as he explained the cancellation of his long shift, guiding him down the side passage of the house with the odd Mmmhmm and I see. She marched him across the Battenberg patio, over the lawn to a hole in the Simmondses fence.

When he made no response she huffed and tutted, dragging him back to the house.

She led him into the downstairs bathroom and pointed to the basin where an odd fish swam back and forth.

“What am I looking at?” he said; God had tried to make a goldfish but messed up with this one…

“You don’t recognise it?!” she said, her eyes bulging as wide as the fish’s, “It’s from the fisherman gnome. I found it flapping by the fence.”

He frowned at her. “Rubbish! Get it out the sink. Chuck it the pond before it dies.”

He went to change from his work suit, and as he did, considered what she’d said. She’d never been one to go off on flights of fancy; she was the sober-minded one of the two of them.

And the fish had looked weird; a child’s toy come to life…

He pulled on his joggers and went downstairs to see if they could get to the bottom of the missing gnomes and the hole in the fence. Molly had the portable TV on when he entered the kitchen.

She was frozen with a half-peeled carrot in one limp hand and the peeler in the other, gaping at a montage of aerial shots panning across the screen. They all showed empty raised platforms and plinths. One was in a familiar landscape.

“Shhhhhh!” she said, springing to life.

“Angel of the North, The Great Buddha of Thailand…even Nelson’s Column…” the reporter was saying. The camera changed and swung up the flutes of a huge pillar. Nelson was missing.

The view shifted to Paris minus its famous tower. A well-dressed man pointed to pillars of smoke across the city which trailed behind something iron and massive that ploughed onwards with the scream of metal.

Molly skipped channels: This reporter advised that just before the Forth Bridge had walked off, people heard the sound of a blaring trumpet.

The presenter handed over to a Stateside correspondent who, ashen faced and cringing, stood below the giant face of Abraham Lincoln which was struggling, along with the other granite presidents to free itself from the Black Hills of South Dakota.

His phone rang: Chalky on a video-call (which he bloody hated).

“Bernard, we’ve a problem…”  He turned his phone to show a derelict prow of verdigris moored at Berth 46, dripping seaweed, encrusted with barnacles, and its hull missing from midships to stern.

Chalky swept the phone upwards but Bernard didn’t need to see the nameplate on the famous hull.