Given Time, There Will Be Peace 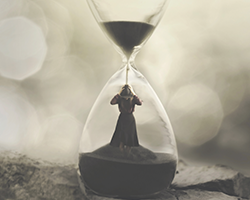 Agent Rodriguez peered through the glass window of the cell door. She preferred not to think of it as a cell but that was the descriptor that fit despite the extravagant furnishings inside. Plush furniture, modern media tech, well-stocked bookcases, and a private bath couldn’t disguise the windowless walls or barred door. Less noticeable, but where the reclining prisoner’s eyes were locked, was the time stream buffering device. It was affixed to the faux chimney column and secured the prisoner in time as well as space.

“He’s been completely silent this time?” Rodriguez asked Agent Webb, the guard on today’s rotation. Rodriguez was distinctly aware of Agent Markham behind her, hanging on her every word.

“Other than thanking me for the food, yes. Even while he slept, no mutterings. He appears—” Webb was suddenly silent.

Rodriguez pulled away from the door and turned towards the older agent. “Yes?”

Rodriguez gazed down the empty hallway as the tension in her face tightened. She had never liked this assignment, had never liked this stratagem employed by the Time Bureau. She much preferred the Futures Mapping Division, where she specialized in identifying the required elements for a future utopia. She only had to think about their goal, not how they would get there. But she was transferred out to broaden her viewpoint, according to her supervisors. After only one month with the prisoner, she insisted on transferring back to Futures Mapping and was now training her replacement, Agent Markham.

After this week, she would never again have to wipe the prisoner’s memory and witness the deadening of his eyes. Oftentimes, he was loath to forget some new pleasure from the recently tested time stream. Other times he was eager to forget the horrors he remembered humans could inflict on one another. Those were time streams Rodriguez carefully marked as NONVIABLE and immediately sent to upper management.

“Is that unusual?” Agent Markham asked, pulling Rodriguez away from her thoughts.

“What’s that?” she asked, reluctantly focusing on her trainee. She wouldn’t say she disliked Markham, necessarily, but he was a bit intense. Too eager, too green. A flash of the prisoner’s deadened eyes brightened Rodriguez’s memory again. Markham was too hopeful.

Agent Markham rolled onto his toes, leaning forward. “Is it unusual for the prisoner to appear peaceful?”

“Um, yes. Usually, the prisoner is distraught or excited. At the very least, he’s irritable and impatient. He has difficulty sleeping and eating when he first returns to this time stream. After he’s debriefed and memory-wiped, he calms down but is often depressed.”

“Interesting. So, so interesting,” Markham said. He splayed his hands against the door, avidly watching the prisoner.

“That’s not the adjective I would use,” Rodriguez replied.

Markham pulled away from the door. “Sorry. I do realize his situation is unpleasant. But now the Bureau is finally interested in exploring why he’s the only known person able to straddle multiple time streams simultaneously. And remember differences and results our field agents introduce to the time stream. There would be no point in manipulating time without him. How is he able to do that?”

“But is it worth this?” Rodriguez gestured towards the locked door. “We should be figuring out ways to evaluate outcomes without his… help.”

“You should spend some time with the theorists, Rodriguez. There’s more at stake here than his personal welfare. Several theorists think his unique ability is not just a neat parlour trick,” Markham said. “They think his existence is a keystone supporting the stream of time, a fulcrum allowing us to make small changes without committing to the outcome. But it only works if he stays within the time stream buffering field in his room.”

Rodriguez sighed heartily. It was hard to avoid fatalists at the Time Bureau. Agent Webb was hanging on every word. “What do they think will happen if he leaves his room?” she asked. Her primary job was to ensure that didn’t happen but in the two years since the program began, not once had the prisoner attempted to escape.

Pleased to continue the conversation, Markham turned to the tall, muscled guard. “They think the changes will be permanent, at least to the rest of us. Maybe there would be parallel time streams everywhere, not just in this room. Maybe the prisoner would be able to choose which stream would be primary and which would be splits, not that the rest of us would even be aware. Maybe the time streams would become unstable and collapse or intertwine randomly. No one knows.”

Rodriguez gazed down the hallway while the other two talked. For a moment, Rodriguez let herself imagine the prisoner striding through the Time Bureau campus unhindered, his sharp eyes taking it all in, his sharp mind a benefit to them all. What wonders could this man accomplish if he was able to move through time willingly? Would the prisoner help manipulate a time stream to solve all the world’s problems? Did the prisoner already discover a time stream where peace reigns supreme? Even in her imaginings, Agent Rodriguez couldn’t bear to humanize the prisoner with his name. Not until she was forced to address him during his debriefing.

“Let’s get on with it and find out what changes occurred this time,” Rodriguez interrupted. She jerked the key into the lock, forgetting to look at the prisoner again, and pulled open the door.

Taken by surprise with the sudden action, Agent Webb stepped up to block the opening, but a booted foot and knee already filled the gap. As the prisoner heaved against the door, Webb stumbled backward into Rodriguez and Markham. The falling agents never hit the floor.

Ezra Naji Darwish stepped into a now empty corridor and began finding his way out of the building, knowing there were no more Time Bureau agents to stop him. It had taken a long time to find a time stream where the Time Bureau would cease to exist, and now that his goal was achieved, he was eager to rejoin the rest of the world. He wasn’t entirely certain how the rest of humanity was affected, or who and how many still existed on the outside, but it was a risk he was willing to take.