Elsa’s Kitchen and a Room Full of Pants 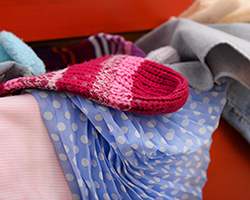 Victor sat on the edge of the bed, surrounded by underwear and socks and ladies’ things that he wasn’t quite sure what they were or where they were meant to go exactly. He frowned and blinked once, slowly. He tore his gaze away from the chest of drawers and wondered if he should call his wife…

…Elsa lost socks. Not purposely – it was just something that happened, something that happened to everybody, so she didn’t mind or take any particular notice. Except when she had to buy new socks, or worse, when socks she’d just bought went missing. There was nothing worse than being mildly inconvenienced. Elsa lost other things too, on occasion, but Victor always remarked upon the missing socks. There were supposed to be two socks after all, a pair, so one sock on its own was not right.

“Connor, put that down, poppet, there’s a good boy,” Elsa said, looking away from her washing basket for long enough to stop her grandson swallowing one of her Wade Whimsies. It was the owl one too, her favourite. She would hate for him to swallow that one.

She cleaned toddler drool from the porcelain owl and set it back on her Welsh dresser before lifting Connor from his chair and placing him on the kitchen floor. He gurgled happily, said, “Na na na,” and then proceeded to pull dirty laundry from the basket.

“Helping Nana with the laundry?” Elsa asked him, smiling.

“Na na na,” Connor replied, and threw a pair of Grandad’s Y-fronts across the kitchen. They glided gracefully across the polished floor and disappeared under the tumble dryer. Connor giggled.;

Elsa frowned and then waved a hand dismissively. “Not to worry, we’ll get those later,” she said. Connor didn’t reply; she didn’t expect him to. He wasn’t a great conversationalist. She gave him a smile and sang tunelessly for a little while, sorting the socks into pairs.

When she looked again, Connor was crawling determinedly towards the tumble dryer, so Elsa scooped him up into her arms and bounced him up and down. “Just where do you think you’re off to, mister?” she asked him.

“Grandad’s decorating the spare room just for you,” Elsa told her grandson. She supposed he was still doing that and hadn’t snuck out of the house for a sneaky pint down the Dog and Duck. She shook her head; she would’ve heard the front door…

…Victor reached for his walking stick and tentatively gave the chest of drawers a prod. When nothing happened, he frowned thoughtfully and got to his feet. He gave the chest of drawers a kick with his slippered foot. Nothing happened. Victor reached out a hand and took hold of the brass handle of the top drawer; he pulled the drawer out, slowly. A pair of Y-fronts hit him in the face. He let them drop to the floor and gawped at the swirling vortex of light.

“Elsa?” He waited, staring at the vortex. Elsa didn’t answer him. How long had a swirling vortex been hiding in the chest of drawers? He tried to remember the last time he’d even bothered looking in the spare room, let alone inside the musty old piece of furniture.

She was getting deaf in her old age, poor dear. Victor carefully closed the drawer and headed into the kitchen.

“Love? There’s a portal in the spare room spitting out underpants.”

Elsa turned to him, Connor held against her hip. “You have been down the pub! You’re meant to be doing the room for Connor.”

Victor’s bushy eyebrows met in the middle as he frowned. Connor giggled. “I’m not drunk, woman. Come and see.”

Elsa knew that the quickest way to get Victor back to work was to prove him wrong, so she followed him into the spare room and bounced Connor in her arms while she waited for her husband to show her whatever crazy thing he thought he’d gone and found. She pursed her lips at the number of undergarments strewn about the room and hoped Victor wasn’t using them as paint cloths.
Victor opened the drawer with a flourish. Elsa raised her eyebrows.

The drawer was empty.

“Let’s go and put the laundry on,” Elsa said to Connor. “Grandad’s just being silly.”

Victor eyed the chest of drawers and wondered if the paint fumes had affected his brain. He went to open the window, just in case.

Back in the kitchen, Connor pulled another pair of Grandad’s underpants from the laundry basket and put them on his head while Nana wasn’t looking. He crawled doggedly over to the tumble dryer, took the pants from his head and stuffed them underneath the machine. He giggled to himself and bounced up and down on his pudgy bottom. Maybe one day, when he was old and boring, he’d do something interesting with the portals. For now, it was fun messing with Nana and Grandad.

Connor clapped his hands together, pleased with his evil genius. If only he could get hold of that owl Whimsie again, he was pretty sure his life would be complete. He eyed up his high chair and calculated the distance to the dresser. Doable.

“Elsa! Another pair of pants has come out of that blasted portal! Elsa!”

“Na na na,” Connor said, making Nana aware that Grandad was calling. He held out his arms as she scooped him up and plonked him back into his high chair.

He watched as she left the room. He turned and stretched with sticky fingers until the owl was in his grasp. All he had to do was hide it in his nappy, then at the opportune moment, bam! Straight under the tumble dryer.

Connor cackled happily as Nana came back into the room and rolled her eyes at him in exasperation at crazy Grandad. Life, he thought, was pretty awesome.