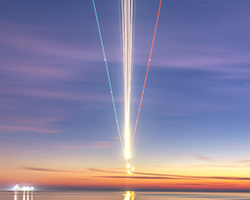 Evening darkness thickens its veil over the cloudless sky as the Earth’s heat drives the bats zigzagging higher. Nothing Greg can do about them, except hope they will not cut across his photo. He will have just one chance to snap his dream picture of H-Line’s new hyper-plane on its London to New York flight.

A cream light arcs up from the tree-lined horizon. He predicts its hypersonic flight path and points his camera ahead of the plane, finger ready over the shutter tab. As it comes closer, the cream divides into red on the right and green on the left. The fuselage material is absorbing sun- moon- and star-light, and transferring and changing it into this plane’s navigation lights.

He bites his lip: closing, almost there. He hits the tab.

The hyper-plane flies past in silence.

Greg examines the image on the camera’s screen. Got it after all these months: plane dead centre; its sleekly curved airframe in staggered rainbow colours – red on the plane’s left, orange and yellow lines down its centre, and green on its right side, haloed by bands of blue, indigo and violet. The version on film with the rainbow colours merging more smoothly is a sure prize-winner.

A bat crashes into his hand. His camera falls and bumps downhill. He half-runs, half-slides after it. The camera smashes into a rock, its back opening and the film dropping out.

He stops, sinks to his knees and groans: his beautiful photo is ruined.

Four days later produces another sultry dusk, the bats flitting even higher and well away from him. Greg fumbles his replacement camera onto his new tripod. Nerves eat away at his feeling of good luck.

A cream light streaks up from the trees. He estimates the plane’s trajectory, swivels the camera to point ahead of it and keeps his finger over the shutter tab. The plane nears, very close. He snaps the photo.

The hyper-plane speeds on silently.

The camera’s screen displays the aircraft to the lower left, yet its staggered rainbow is more spread out. Not a bat in sight. This is a money-earning picture; one he had struggled to get for so long.

Bats hit his back and crazily crisscross in front of him. He flings his arms over his camera. “Get off,” he yells.

Abruptly, the bats revert to their normal darting flight mode.

Twice is too much of a coincidence. He looks round for a cause of their weird behaviour. In the distance is a cream light descending into the horizon. He knows the plane has an ultrasonic boom, beyond a normal person’s hearing range. Could it be affecting the bats?

Greg hates robots answering his calls, even if they appear as metal-cased machines. No other way of getting through to H-Line is available. “I need to talk to a techie,” he shouts.

“I’m sorry, sir, I have already explained H-Line designed the ultrasonic boom of our hyper-plane to be outside the hearing range of all bat species. Your issue is judged—”

The robot switched to a woman with grey-streaked hair. “I’m Abigail Marchand. Sorry to butt in, but your call sounded unusual. What happened?”

“At last,” he says, unable to hide his exasperation. He told her about the bats.

“Let me check something.” She types something on a keyboard and reads off a screen to her side. “Well, they were two different planes. We have to assume the problem is common to all the fleet.”

“Maybe.” Her hand rubs her chin. “Could be the combination of the weather and terrain lowering the ultrasonic frequencies to within the bats’ hearing range. And without hearing they can’t navigate. Theoretically possible, highly unlikely.” She suddenly smiles. “And easily solved by our hyper-planes taking a different route.”

“What if it’s something else?”

She turns business-like. “One thing at a time. I’ll get my sonics team to run the numbers. Knowing your hearing range would help us to get the answer more quickly. Can you visit us for some hearing tests? All reasonable expenses paid.”

Her sonics team? She is a high-up in H-Line. The thought agitates him. “Sure,” he croaks.

His ears suffer a mild ache from the testing. He complains. The tester, both horrified and reassuring, takes him to his boss: Abigail.

“I didn’t expect to see you personally,” Greg says.

“A director, yes. But we’re a high-tech company.”

That means nothing to Greg. In fact, he is confused.

She chuckles. “Means we have high-tech behaviours. An AI alerted me to your call content.”

“Thanks to your test results—”

“There was a lowering of ultrasonic frequencies, but they remained well outside the bats’ hearing range.”

“What caused them to go haywire then?”

His unease grows, though he cannot pinpoint why. “The timing, similar effects on the bats … it has to be the same cause on both planes.”

“The only thing I can think of is if they had their aerodynamic shapes warped … Oh God, I hope it’s not a design fault.” Her eyes dart from side to side. “Both had the new tech fuselage material … oh hell not another Comet debacle.”

“Three Comet aircraft crashed in the 1950s because they didn’t know about brittle fatigue.” She glances at her watch. “Damn! She’s already taken off.”

She video-calls a man at England’s Air Traffic Control Centre. His tousled hair betrays he is under pressure. “Run an emergency landing for our hyper-plane. Anywhere. Now! Do it as a practice to keep the passengers calm.”

Greg watches the evening news in Abigail’s office. They show the hyper-plane landing with its front undercarriage only partly lowered. He puts his hand over his mouth. Engines roar. Back wheels touched down. Fire engines follow the plane. He has to look away.

Abigail puts her phone down. “They got everyone off.”

The phone rings again. She answers it.

His gaze is drawn back to the news. They are interviewing a passenger. The words flow surreally over him.

Abigail gently shakes his shoulder. “Do you still have that photo of the plane?”

“National Channel wants to pay mega-pounds for it.”

His picture is a money-spinner. His dream is coming true, but not the way he wants it to. He has not earned it. It is not for its artistry, but for its newsworthiness. His dream of taking a perfect photo is more distant than ever.