The Tale of Shir Shaheen and the Caravanserai – Chapter 1: As Wind Along the Waste 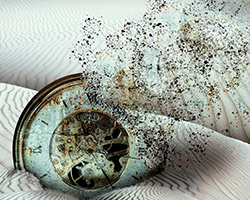 Not the least breath of air announced Shaheen’s coming as he raced towards the merchant caravan, and long he circled overhead in the darkness, like a kite reluctant to land though its meal lies exposed below. No fear of iron made him hesitate, for little was carried by the caravan save knives, and that little only thin and widely scattered. But he scented magic there among the men, powerful enough to rival his own.

Yet the desert glass they carried might be the particular shard bearing his brother’s soul. So hoping against hope to find and free his brother at last, he swept all doubt and hesitation aside and entered the glass. Alas, hope was betrayed. For iron was concealed within the shard; pinching, stinging, biting iron, surrounding him, making him tremble again, but now in fear.

“I have him,” called the sorcerer whose magic Shaheen had scented.

Not for long, vowed Shaheen, for even as he trembled, even as the iron pinched and stung and bit, he gathered himself to force his way from the shard.

Yet before he could break free, the sorcerer had gathered the scattered slivers of iron and formed a cage, setting the shard within it. Still Shaheen did not despair, for the cage was surely not strong enough to hold him more than a day or two. But as the caravan journeyed onwards towards Paridiz, he recalled the mules making for the city with their burden of iron. Then understanding came – they doubtless carried strong chests to imprison him forever. Harder he fought against the treacherous iron, but now his heart quailed within him.

“Greatly pleased will be the vizier,” said the captain of the caravan. “With the djinn captured and merchants now free to cross the desert in safety, and his city of Gorj best placed for such a crossing, the great caravanserai which he plans there shall thrive. His city shall be wealthy.”

“The vizier will be wealthy, I doubt not,” said the sorcerer, “but does the wolf share his spoils with the sheep?”

And so Shaheen learned of the vizier of Gorj, and he cursed the man with many bitter curses and the vengeance he swore was terrible.

Steadily the caravan rode on, until it passed between the tumbled gates of Paridiz and arrived at a once-grand building where the captain was to meet the mule train, but where surprise and shock also awaited him.

There were the mules he expected, though more numerous, with men tending them. There were the iron chests, thick and strong and heavy, ready for the shard of desert glass; chests to be enclosed one inside another inside another and taken to Gorj and buried deep within the bowels of the city, and the djinn with them.

But there, also, were two fine horses richly caparisoned, and bags and baggage, sacks of provisions and casks of water, which were not expected. And emerging from the ruined building was a handsome woman of elder years dressed in widow’s robes, and with her a boy of twelve or so standing tall and erect, pretending to greater courage than he possessed.

“We have guests, Roshan,” said the woman to the boy, her voice composed though her face showed signs of grief. “Where are thy manners?”

The boy bowed to the sorcerer and captain, and bade them enter the house. “For though, as you see, we are ourselves but newly arrived, guests are always welcome in our home. Grandmother sees to the preparation of our morning meal, and humble though it be, we beg that you honour us by sharing it.”

The men entered, the sorcerer keeping firm hold of the cage of iron imprisoning Shir Shaheen, and in a decaying room on a floor hastily swept clear of sand was a dinner cloth of mended cotton and cheap pottery dishes of plain food – flatbreads, sheep cheese, dates – though it was clear from the widow’s courtesy and voice that she was of some rank and merited far better.

A maidservant brought ewers of water so the men could wash as the widow set more dishes on the cloth and more cushions at its edge. The captain, having watched her, said, “Your pardon, lady, but do I not recognise thee from my journeys to Gorj? Art thou not the widow of Lord Roshan, once commander of the old Khalifa’s armies?”

“But hast thou not a fine house and great lands in the city of Gorj?”

“How then comes thee here and in such state?”

So they sat, and ate, and a tale she told. A tale of theft and evil-doing, and – making Shir Shaheen in his iron cage listen more closely – a tale of the vizier of Gorj. For with her husband and son dead and her grandson not yet of age, the lady was ruled by her husband’s brother, the vizier’s close ally.

“The house and lands of which thou spake, they were mine but under his control and he has sold them, at a quarter of their value, to the vizier, and purchased from him in return the city here, which now is mine, where my grandson and I shall live for evermore. For my home, situated so well for their purpose, and so cheaply have they acquired it, they plan to turn into a common inn for the merchant caravans. And on the gardens which poets and philosophers have praised, they shall build stables and bath houses and brothels.”

The captain was angry as he heard this, and when the meal was done, he drew the sorcerer aside. “This is impious,” he said. “God’s law is clear. Tender care must be shown to orphans and to widows, and their rights respected. To use them thus is unrighteous. I shall do what I may, leave such food and water as can be spared to eke out the rations sent with them, and care shall I take to pass this way again with more. But shamed am I now that I was party to the trapping of the djinn, the expectation of which incited the vizier to steal the lady’s lands. Cruel and harsh as the creature has been, this action of the vizier’s is far worse. Yet what can we do? We cannot let the djinn go free, in hope the lady might recover her estates, for what mercy shall any now receive at its hands?”

“What mercy indeed?” replied the sorcerer, but said no more.

The captain kept his men busy all that day, helping the boy Roshan clear more rooms of the sand which buried them, restoring shutters at windows, repairing doors as protection against wild animals. But he did not see the sorcerer again until dusk was drawing near and with it the departure of the caravan and men. Then the sorcerer appeared, and he placed the cage of iron inside the first of the iron chests and locked it, and that chest was locked inside another inside another.

The caravan and mules and all the men then left Paridiz and with them went the two fine horses, much to the captain’s anger, but the muleteers had their orders which they would not disobey, and the lady confirmed she had no grain or fodder nor enough water for the beasts. And when all arrived at Gorj the vizier was pleased indeed, and the iron chests were buried deep in the bowels of the city.

But Shir Shaheen was not within them.

During the day in Paridiz when the captain could not find him, the sorcerer had worked great magics and, as dusk approached, he freed the shard from the iron cage and secreted it within the city walls. “Thy prison of glass shall not hold thee long, this I know, Shir Shaheen,” he said. “But the binding I now have placed upon thee shall be beyond thy means to break. Here thou shalt stay, confined to thy brother’s city, unable to do harm to mortal men, thy mighty powers gone and only a dribble of magic left to thee. Here have I bound thee for seven squared years times seven squared years, unless one certain thing no other djinn has done thou dost do. Freedom shall then be thine. Dost hear me, Shir Shaheen? One certain thing no other djinn has done, then thou shalt be free.”

The sorcerer spoke truly, for the shard did not long hold Shir Shaheen, but he found himself bound within the city with only a dribble of magic left to him. And long he wrestled with the puzzle of the sorcerer’s intent in acting as he did, saving him from everlasting torment, but …

“… but thy physician does admonish me with his frowns, my dearest friend, and makes it clear I must cease my storytelling and let thee fall into healing sleep. No matter. For when thou shalt waken, I shall still be here. And just as with the tales spun by Scheherazade, this tale of Shir Shaheen shall continue.”